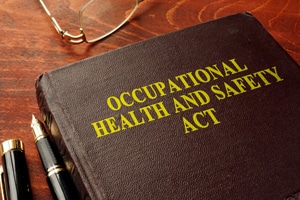 We introduce this subject matter in our Gas Detection Applications Primer.

OSHA has promulgated PELs (Permissible Exposure Limits) for many substances, and—unlike the ACGIH TLV®s—these have the force of law behind them. In general, the PELs are 8-hour time weighted averages, but ceiling limits have been established for some chemicals. 29 CFR 1910.1000 Table Z-1 details these values. In certain cases—such as ethylene oxide—this table refers to a separate section within 29 CFR 1910.

Per 29 CFR 1910.1000(a)(1), the Ceiling Value sets a concentration which shall at no time exceed the exposure limit given for that substance. If instantaneous monitoring is not feasible, then the ceiling shall be assessed as a 15-minute time weighted average exposure which shall not be exceeded at any time during the working day.

The OSHA Action Level—calculated as an eight (8)-hour time-weighted average (and generally lower than the PEL)—is a concentration designated for specific substances listed in 29 CFR part 1910 that initiates certain required activities such as exposure monitoring and medical surveillance. [29 CFR 1910.1450(b)]. Historically, unless otherwise specified, the Action Level is set to one-half of the PEL.

Let’s now use ethylene oxide (EtO) as an example.

1.   You are responsible for a particular facility, and suspect that ethylene oxide leaks might occur in that environment. Thus, you perform sampling—perhaps using a rented portable instrument or a passive sampler (badge). Alternatively, you may hire an outside service to do this testing for you.

Upon doing sampling for several days, on different employees; or by using the portable instrument as a survey tool for the affected area, you find that the 0.5 ppm level has been exceeded. Now, you must take action, and part of this action will include monitoring the area on a full-time basis.

2.   Once continuous monitoring is installed (either by using a single point system, or one outfitted with more than one monitoring point) two important regulatory levels now come into play: The Permissible Exposure Limit (PEL) and the Ceiling Value.

When examining OSHA Table Z-1 for these regulatory levels, you are referred to 29 CFR 1910.1047, which is devoted to ethylene oxide. Within this statute, you determine that permissible exposure limits are covered under 1910.1047(c), and that, per 1910.1047(c)(1), “The employer shall ensure that no employee is exposed to an airborne concentration of EtO in excess of one (1) part EtO per million parts of air (1 ppm) as an (8)-hour time-weighted average (8-hour TWA).”

As to the Ceiling Value, in this statute [1910.1047(c)(2)], it is called the “Excursion Limit.” And, “The employer shall ensure that no employee is exposed to an airborne concentration of EtO in excess of 5 parts of EtO per million parts of air (5 ppm) as averaged over a sampling period of fifteen (15) minutes.”

3.   Now, you must determine where to set the alarm levels on your EtO continuous monitoring system. Clearly, 1 ppm is too low for an instantaneous alarm, in that the PEL is concerned with an 8-hour TWA, and not a 1 ppm instantaneous value. On the other hand, the excursion limit is 5 ppm on a 15-minute TWA (specifically for EtO).

4.    While the actual alarm settings of a toxic monitoring system are at the discretion of the user, some general recommendations can be offered:

Bearing in mind that most toxic gas monitoring systems (including Interscan’s) are provided with two independent adjustable alarm set points (let’s refer to them as alarm-1 and alarm-2), one scenario would have alarm-1 set to 2.0 ppm, and alarm-2 set to 4.0 ppm. Another common practice would have the alarms set to 2.5 ppm and 5.0 ppm, respectively. Note that both the PEL and excursion limits are based on 8-hour averages, so to have a true PEL or excursion alarm would require a suitably-equipped data acquisition system, such as Interscan’s Arc-Max®.

To be clear, a true PEL or excursion limit (ceiling value) alarm would actuate at the very moment that these levels are exceeded.

Please contact us for further information, and guidance on these matters.