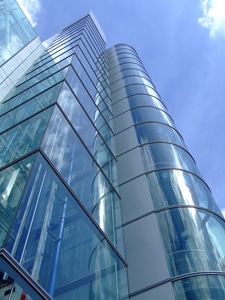 As landlord for the civilian federal government, the Public Buildings Service—a principal division of the General Services Administration (GSA)—owns or leases 8,681 assets, maintains an inventory of more than 370 million square feet of workspace for 1.1 million federal employees, and preserves more than 500 historic properties.

For several years, GSA has been in the forefront of green building initiatives, and has written strong policies into its Solicitations for Offers (SFOs) to support its Green Lease Policies and Procedures for Lease Acquisition.

GSA’s original “Green Lease” template addressed such matters as re-use of building materials, maintenance of indoor air quality during construction, use of recyclable and recycled content products, and use of environmentally friendly building products and materials.

PBS’ Desk Guide For Indoor Air Quality Management (2016) also includes guidelines for asbestos and airborne mold. The requirements for the gases are as follows:

Readers familiar with toxic gas detection applications are aware that CO detection has been used for decades to control ventilation in such structures as parking garages and tunnels. The idea is that the greatest economy is reached when the ambient concentration of CO is maintained at a safe level, with the fans running just enough to also conserve energy.

CO is chosen as the target gas of measurement here since it is an ideal marker for automotive vehicle exhaust, and any build-up of exhaust and thus CO indicates an immediate need for additional ventilation.

In office buildings and other occupancies in which people will be situated, and in which no processes are occurring known to release toxic gases, CO2 is the target gas of measurement, since it is exhaled by humans. Similarly, any build-up of CO2 indicates an immediate need for additional ventilation.

1.     In general, ventilation control is effected by response to instantaneous levels in toxic gas concentrations. Proper ventilation should ensure that the guideline levels are met, but rigorous gas monitoring (especially for formaldehyde) in commercial buildings is rare.

Moreover, CO2 is not toxic per se. Rather, it is a simple asphyxiant. Thus, the OSHA level is set as an early precaution against the oxygen levels becoming too low by displacement. In normal office building occupancies, elevated CO2 is indicative of poor ventilation, and a condition whereby the concentration of various toxics could build up.

3.     Then there is the matter of practicality. Currently available in-duct instruments for CO are nowhere near sensitive enough to support a 9 ppm standard. More sophisticated CO monitors are on the market, but are out of the acceptable price range, if they are to be deployed at several locations within the ducting—as is typical for the CO2 units. Similarly, HCHO analyzers—such as Interscan’s—are sensitive enough to meet the specifications, but are not similarly priced to the in-duct CO2 units, either.

While CO levels are unlikely to exceed the 9 ppm standard as long as there is not excessive smoking, and the make-up air is not contaminated by external sources, HCHO levels could easily exceed the 0.016 ppm standard, based on introduction of new carpet, furniture, drapes, and painting operations. Special care would have to taken during such activities, and short-term waivers might need to be put into effect, along with these activities being limited to off hours.

4.     Do the GSA indicator levels imply that office buildings must continuously monitor for CO, CO2, and HCHO? Yes, even if GSA did not intend this. After all, a published standard implies compliance, and compliance implies testing of some kind. As such, the landlord is better served to have some data on hand to defend against possible litigation.

Based on our experience in occupational health matters, cases do occur whereby an individual who may (or may not) have a legitimate medical condition, might attempt to blame it on environmental factors, and seek some remedy from (in this case) the landlord. This remedy could involve breaking the lease, as was the case several years ago with claims (some quite valid) of environmental tobacco smoke (ETS) indoor air quality problems. Note that successful ETS claims occurred in the absence of specific air quality standards.

Here are our recommendations…

Interscan stands ready to assist you in the dynamic world of green buildings.