Where should I set the alarms on my toxic gas monitoring system? 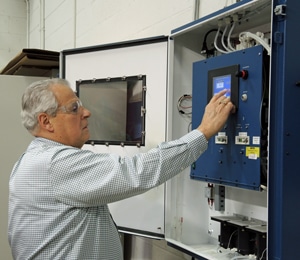 Ultimately, the entire matter of where to set the instantaneous concentration alarm(s) is tied into what is expected by the regulatory agency. In the United States, for most workplace environments, it is the Occupational Health and Safety Administration (OSHA).

OSHA has published Permissible Exposure Limits, or PEL’s, for many toxic substances. Three types of PEL’s are defined, although not for every substance.

One more term is used: “Action Level.” This is usually one-half of the allowable 8-hour TWA for the substance in question. The only significance of the action level is as a benchmark during the initial screening of a workplace. If concentration levels of the chemical in question are greater than or equal to this action level, then regular monitoring will have to be done. For certain compounds, such as ethylene oxide, OSHA has formulated detailed guidelines on the initial monitoring process.

There is no logical reason to set an instantaneous alarm for a toxic gas monitoring system at the action level. This number is already one-half of a value that is allowable for an 8-hour time-weighted average exposure. In fact, setting alarms at the action level, unless there is a purpose behind it that has nothing to do with regulatory compliance, is to be avoided, as it tends to upset personnel needlessly, and may require more frequent instrument maintenance and calibration.

OSHA’s PEL’s are derived from many sources, including the National Institute of Occupational Safety and Health (NIOSH), the American Conference of Governmental Industrial Hygienists (ACGIH), and the American National Standards Institute (ANSI). NIOSH and ACGIH also publish standards for airborne contaminants, that are not always in harmony with the OSHA regulations, but are often helpful, especially in matters that OSHA does not address.

Notably, California’s Division of Occupational Safety and Health (DOSH)—better known as Cal/OSHA— promulgates its own Permissible Exposure Limits For Chemical Contaminants, which can be more strict than federal OSHA’s.

The instrument user is well-advised to make himself familiar with the applicable regulations. Of course, we at Interscan can provide guidance. Please contact our sales department for any applications assistance.

OSHA specifies an 8-hour TWA of 50 ppm. Setting the system alarm at 50 is not recommended, unless the workplace concentration is always teetering just below this level, and compliance with the 50 ppm standard is truly an issue.

Although OSHA does not define a STEL or ceiling value for CO, NIOSH does, and it is 200 ppm. Absent the condition of meeting the 50 ppm standard, a more prudent course would be to set alarm-1 (the warning alarm level) at 100 ppm and alarm-2 (the danger alarm level) at 200 ppm.  Cal/OSHA sets a TWA at 25 ppm, and a ceiling at 200 ppm.

All Interscan continuous monitoring systems are provided with at least two adjustable alarm levels, and our portable units are equipped with a single adjustable alarm set point. In this example, a single alarm-equipped unit should be set between 100 and 200, so a logical choice would be 150 ppm.  Adjust lower for Cal/OSHA  (40 ppm for alarm-1 and 175 ppm for alarm-2).

OSHA does not specify an 8-hour TWA, but denotes a ceiling value of 1 ppm.  In this case, set points of 0.5 ppm for alarm-1 and 1 ppm for alarm-2 would be a reasonable idea. A single-alarm equipped unit should be set somewhere between 0.5 and 1, probably closer to 0.5.  Cal/OSHA sets a TWA at 0.5 ppm, and a STEL at 1 ppm, so the above settings would still apply.

OSHA calls out an 8-hour TWA of 1 ppm, with an excursion limit of 5 ppm. ACGIH has no STEL, but concurs with the 1 ppm TWA. We would recommend settings of 2 ppm (or 2.5 ppm) and 5 ppm, for alarm-1 and alarm-2, respectively. A single-alarm equipped unit should be set at 2 or 3 ppm.

There is no conceivable reason to set any alarm at the action level of 0.5 ppm, since this value is of no significance once monitoring is formally underway.

OSHA specifies an 8-hour TWA of 0.75 ppm, and a STEL of 2 ppm. ACGIH defines a TWA of 0.1 ppm, and a STEL/ceiling of 0.3, and a TWA of 0.1 ppm, while NIOSH posts an 8-hour TWA of 0.016 ppm and a ceiling of 0.1 ppm. Inasmuch as the U.S. Environmental Protection Agency’s Integrated Risk Information System (IRIS) classifies formaldehyde as a probable human carcinogen, the ultra-low numbers proffered by ACGIH and NIOSH surely reinforce the notion that exposure should be as low as possible. American workplaces are legally required to meet the OSHA limits. Still, if a workplace can be kept at lower levels, so much the better.

No national agency specifies a time-weighted average exposure recommendation. Rather, only ceiling values are proffered. ACGIH sets theirs at 2 ppm, while OSHA and NIOSH have theirs at 5 ppm.  Cal/OSHA specifies a TWA of 0.3 ppm and a ceiling of 2 ppm. The International Agency for Research on Cancer (IARC) denotes HCl as “IARC-3: Unclassifiable as to carcinogenicity in humans.” Similarly, the ACGIH calls it “Not classifiable as a human carcinogen.” Typically, this designation is used for compounds that “could” be carcinogenic, but of which there is insufficient data to draw this conclusion.

While the OSHA level has the force of law in the United States, prudence would dictate a nod to the lower ACGIH concentration. Thus, we would recommend that a single alarm unit be set to 2.5 or 3.0 ppm. A two-alarm unit should have alarm-1 at 1.9 ppm, and alarm-2 at 4.0 or 4.5 ppm.  For Cal/OSHA compliance, consider alarm-1 at 0.5 ppm, and alarm-2 at 1.5 ppm.

OSHA’s 1 ppm PEL often comes as a big surprise to “ethylene oxide is evil” fanboys, who seek to drive EtO out of hospital sterile processing departments. This 1 ppm level is agreed upon by Cal/OSHA, NIOSH, and ACGIH. For facilities without a history of problems, we suggest an alarm-1 setting of 2.0 ppm, and an alarm-2 setting of 5.0 ppm.

OSHA does not specify an 8-hour TWA, but instead defines a ceiling concentration of 20 ppm. An additional provision allows an “acceptable maximum peak above the acceptable ceiling concentration for an 8-hour shift” of 50 ppm, for a maximum duration of 10 minutes once, and only if no other measured exposure (presumably above the ceiling value) occurs.  ACGIH lists a TWA of 1 ppm, and a STEL of 5 ppm.  NIOSH sets a 10-minute ceiling of 10 ppm.  Cal/OSHA  marks a 10 ppm TWA; a 15 ppm STEL, and a 50 ppm ceiling.

Given the disharmony between OSHA and ACGIH, prudence would favor a bias toward lower alarm levels, although not necessarily in total keeping with ACGIH.

Clearly, the OSHA regulations were written to respond to differing situations faced by various industries that have hydrogen sulfide exposure. For those that actually need the 50 ppm loophole, alarm-1 should be set at 20, and alarm-2 should be set at 50. For those operating at lower levels, settings of 10 and 20 respectively would be advised.  Reduce accordingly for Cal/OSHA.  (10 and 15 ppm.)

Settings for a single alarm unit would be problematical for the high concentration scenario, while a setting of 20 ppm would suffice for the lower level applications.  In light of ACGIH and NIOSH, this setting could be reduced to 10 ppm, or even lower.

OSHA has no regulatory limits on this compound. However, that has not stopped the agency from issuing Rapid Response letters and General Duty Clause citations to employers for what it deems to be high exposures. According to remarks made by Acting Assistant Secretary of Labor for Occupational Safety and Health Loren Sweatt, OSHA is working on a suitable field analytical method for PAA. The implication being that once that is available, standards will follow.

Given the ACGIH value, one might consider an alarm-1 of 0.4 ppm, and an alarm-2 of 1.5 ppm. However, increased instrument maintenance may be necessary to achieve this level of performance. Alternatively, the alarm levels can be set higher, while management uses continuous monitoring with datalogging to determine typical patterns of exposure.

OSHA has published an 8-hour TWA of 5 ppm, with no ceiling value, and ACGIH has a TWA of 2 ppm. with a 5 ppm STEL (ditto Cal/OSHA. No doubt, 5 ppm should be one of the alarm set points on a dual alarm unit, and should be the setting on a single-alarm equipped instrument. Depending on individual circumstances, an alarm-1 setting of 2 and alarm-2 setting of 5 seem appropriate.

In conclusion, there is no pat answer to the alarm setting question, as individual applications will vary, and although OSHA standards have the force of law, the other learned institutions may disagree on allowable levels.

With practical experience that is simply unmatched in the industry, Interscan stands ready to help you with all aspects of your toxic gas monitoring applications.