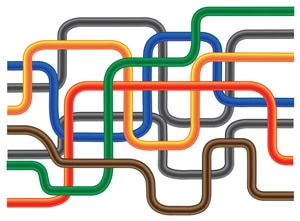 “Continuous” monitoring means that each sampling point is being monitored all the time, and in most cases, the concentration displayed reflects what is truly happening at the point in real time. There are certain exceptions to this involving instrument techniques that run batch analysis, but that is beyond the scope of this discussion.

“Stream-switching” monitoring means that one detector is sampling several sampling points on a sequential basis. As such, the concentration data for a particular point is displayed and recorded in real time only when that point is being actively analyzed.

Stream-switching was first used with laboratory and process gas chromatographs, owing to their high cost, and the understandable desire to amortize this cost over many sample inputs. In fact, automated sequential valves, accommodating as many as 24 inputs, were introduced into chromatography applications early on.

When it became popular to monitor vehicular tunnels and parking garages for carbon monoxide, early techniques included non-dispersive infrared and catalytic oxidation, using Hopcalite®. Since these installations usually featured many sampling points, and the detector technology was expensive, stream-switching became the sampling method of choice. However, no sequential valve intended for chromatograph application would suffice for the long tubing runs, larger tubing diameters, and pressure drops involved. Instead, pneumatic systems utilizing solenoid valves, timers, and high-capacity pumps were developed for this purpose.

Cost savings will accrue with stream-switching in two ways: One detector can be shared over many points, eliminating the need for purchasing several detectors, and only one detector has to calibrated and maintained, reducing labor costs. Of course, the long sampling lines will have to be checked periodically, as will the end-of-line filters at each remote point.

It should be noted that for the purposes of ventilation control in a tunnel or parking garage, stream-switching is a valid approach. Carbon monoxide, in the concentrations generally encountered here, is not immediately life-threatening, and acknowledging that stream-switching may only provide useful data for each point a few times per hour, this is still satisfactory for ventilation control.

But, monitoring carbon monoxide for ventilation control, in an occupancy where few if any people are situated for a time period approaching an 8-hour workday, is hardly representative of the bulk of occupational safety toxic gas detection applications. Indeed, it is in the typical workplace application that the deficiencies of stream-switching come to light.

Many toxic gases encountered in the workplace have extremely low allowable limits, and many have been assigned “ceiling values,” that should never be exceeded. Prudence would dictate that such compounds should be continuously monitored in areas frequented by employees. One could argue that absent a ceiling value or short term exposure limit (15-minute average), all that is needed is to maintain an 8-hour time-weighted average below the allowable limits (TLV®-TWA or OSHA PEL). This assumes, of course, that while a particular sampling point is off-stream, no hazardous release would occur.

The most rational approach would be to store the average value calculated during the on-stream time, but that is at best an approximation, and could easily understate or overstate the true conditions. Thus, your 8-hour time-weighted average calculation for a particular point is based on little data, and mostly approximations. Not good. And remember, we have ignored the problem of a hazardous release occurring while a particular point is off-stream. Since the points are off-stream most of the time, it is likely that a hazardous release WILL occur while a point is off-stream. Not good, again.

There is little doubt that continuous, dedicated monitoring at all points is the preferred approach for occupational safety and defensive archiving purposes, although it can become expensive, given increased hardware and maintenance costs. Fortunately, there are ways to control the expense…

1.     A dedicated continuously monitoring Interscan system, given the less expensive technology of the electrochemical sensors and attendant electronics, is far less expensive than even stream-switching systems utilizing other technologies, such as non-dispersive infrared and photoionization (often employed with a gas chromatograph).

2.     In most cases, a relatively small number of points will suffice. Regrettably, inflated sampling point counts have been touted by certain stream-switching vendors, in an effort to make the high cost of their systems seem more attractive, being amortized over many points.

3.     In applications where many points really are required, Interscan will suggest a cost-effective and safe combination of stream-switching for less critical areas, and continuous monitoring for the rest of the facility. Interscan does have extensive experience in both stream-switching and continuous multi-point applications, with installations dating back to the late 1970’s.

We welcome the opportunity of working with you.