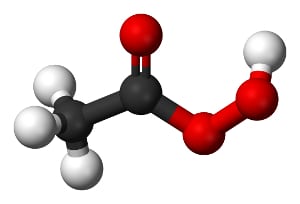 As it happens, acetic acid and hydrogen peroxide do have OSHA Permissible Exposure Limits (10 ppm and 1 ppm respectively), while PAA does not. In another Knowledge Base article, we point out that…

Back in 2006, the CDC posted a report entitled “Evaluation of Worker Exposures to Peracetic Acid-Based Sterilant during Endoscope Reprocessing.” PubChem in its detailed write-up on peracetic acid refers to it as “[A] very toxic compound.”

The American Industrial Hygiene Association published this article in December, 2016 on peracetic acid. Previously, the ACGIH had proposed a TLV-STEL (Threshold Limit Value-Short-Term Exposure Limit) of 0.4 ppm, which is now an official TLV.

So, make no mistake about it: Peracetic is a very useful, and very nasty compound.

Then, there is the matter of OSHA’s General Duty Clause:

(1)  shall furnish to each of his employees employment and a place of employment which are free from recognized hazards that are causing or are likely to cause death or serious physical harm to his employees;

(2)  shall comply with occupational safety and health standards promulgated under this chapter.

(b)   Each employee shall comply with occupational safety and health standards and all rules, regulations, and orders issued pursuant to this chapter which are applicable to his own actions and conduct.

Oddly enough, even though peracetic acid—as it is used in most places—is actually a mixture of three fairly toxic substances, one of our competitors thinks that it is prudent to chemically scrub out hydrogen peroxide from the air sample prior to it entering the sensor, even if they are silent on the acetic acid portion. As to Interscan, our PAA sensors are calibrated against a suitably diluted reagent grade PAA, which creates a gas stream whereby the concentration is determined by wet chemistry.

But then, officialdom is also remarkably silent in this case on how the principle of “TLV of a mixture” should apply here. No doubt, this is because calculating the mixture TLV would require interference-free monitoring of the three PAA components, and the worst bad actor is peracetic acid, itself.

Besides, as Voltaire once said, “Don’t let perfect be the enemy of good.” It is more than “good” that you want to monitor peracetic acid. Famous football coach Vince Lombardi added, “Perfection is not obtainable, but if we chase perfection we can catch excellence.”