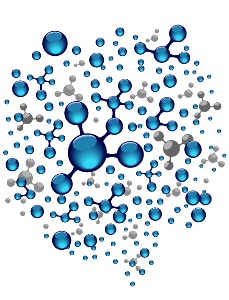 Early on, in our first chemistry classes, we learn about solutions, and different ways of expressing their concentrations. Since a solution is any homogeneous mixture of two or more substances, gas mixtures are indeed solutions. In the world of gas detection, we tend to be concerned with combustible or toxic gases dissolved in air, where the gas of interest is the solute and air is the solvent.

Although most combustible gas meters read out in percent LEL (lower explosive limit), that is simply a conversion from the basic measured value in percent by volume. Most common toxic gas detection instruments read out in parts-per-million or parts-per-billion—by volume

It is noted that in the practical application of preparing reference gas mixtures (span gas or calibration gas blends), the effective and working gold standard derives from the use of a mass balance, with concentrations expressed as the ratio of the number of moles of the minor component(s) divided by the total number of moles in the mixture.

However, real gases are not ideal. The difficulty of making accurate measurements of temperature and pressure during the gas blending process is the reason the concentration unit usage has shifted from volume concentrations to molar concentrations. Moreover, these days, many gas mixtures are blended gravimetrically, owing to the availability of high accuracy, high load electronic balances.

As Jack Marrin of Scott-Marrin reminds us:

“Old habits die slowly, however, and the use of “ppm” or “ppmv” continues to be popular. In the percent world, mole-percent is most commonly used today. Just know that what is really meant, and has always actually been meant, is that the “gold standard” unit of gas concentration usage is the molar concentration.”

[At any given temperature and pressure, the percent by weight, or more rigorously mass percent,
would be found by multiplying each component in the above equation by its molecular weight, and then calculating the same ratio.]

If we wish to express the concentration in parts-per-million or ppm, the ratio is simply multiplied by 1 million instead of 100.

Since the properties of gases are greatly affected by temperature and pressure, it is only natural that any parameter to express concentration would be a RATIO OF LIKE UNITS—whether

Unfortunately, this concept, which is intuitively obvious to a beginning chemistry student, has been lost on many who should know better.

In the early 1970’s, several government agencies, including our EPA and similar groups in other countries, began to express gas concentrations using mixed unit parameters such as micrograms per cubic meter, or milligrams per cubic meter. Of course, these foolishly contrived parameters are a function of temperature and pressure, and require an asterisk denoting the temperature and pressure at which the value was calculated. More often than not, however, this information is lacking.

But, even if it were provided, since real world gas measurements must occur at fluctuating rather than constant temperatures and pressures, an actual user still has to convert back to parts-per-million. Either that, or he can special order a gas detector that internally converts its ppm output to micrograms or milligrams per cubic meter at a specified temperature and pressure. Yes, we have supplied such units.

In addition to being completely impractical, the mixed unit concentration parameters have created their own side effects.

Many potential instrument users are unfamiliar with basic chemistry and are thus unaware that these parameters are affected by temperature and pressure. Moreover, when concentration values are reported to us, using these parameters, they are incorrect at least half the time.

In a recent case, a user mistakenly thought that because in AQUEOUS solutions, milligrams per liter is nearly equivalent to parts-per-million—of the dissolved SOLID—the same would be true for gas mixtures.

Using this “logic,” he communicated his requirement for monitoring 5 ppm chlorine as 5 milligrams per liter. In actuality, 5 mg / liter of chlorine in air works out to be 1696 ppm (at 20 degrees Celsius and 760 mmHg).

You might ask how this absurd practice got started. I have two theories, and they are not necessarily mutually exclusive:

1.     Once Canada embarked on its conversion to the Metric system in January, 1970, American environmental officials, knowing that their standards would be emulated throughout the world (and the world was becoming all Metric), wanted to put forth a good face. Thus, environmental standards were set out in Metric-LOOKING units such as micrograms per cubic meter and milligrams per cubic meter. In fact, there is nothing “non-Metric” about parts-per-million, as it is a dimensionless parameter! Therefore, this mission started out as a fool’s errand.

2.     In occupational health work, regulatory values are promulgated for many non-gas substances, and these are correctly stated as milligrams or micrograms per cubic meter. Perhaps a desire for consistency across all substances, including gases, crept into the proceedings.

Our best advice is to stick with what works: Percent, parts-per-million, and parts-per-billion. And, if you must convert to the mixed unit parameters, use formulas that are accurate!