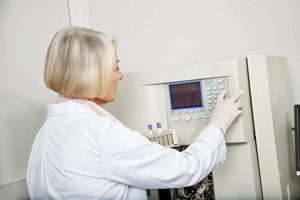 You can tell that the standard was written by knowledgeable instrument people, for several reasons—not the least which is the first sentence of Section 8: “One of the most important steps in analyzer operation is proper calibration of the instrument.” Indeed, but even this standard—and others referenced within it—say precious little about those instances in which no commercial calibration standard exists for the gas of interest.

Unfortunately, such is the case for both hydrogen peroxide and peracetic acid. Nevertheless, plenty of folks want to monitor for these compounds.

We should set a context here. Once one ventures outside of the “typical” toxic gases (carbon monoxide, hydrogen sulfide, nitrogen oxides, sulfur dioxide) not too many end users actually have an appropriate calibration standard at their facility. Rather, they tend to rely on either third party contractors, or utilize a service like Interscan’s SENSOR EXPRESS®.

So, from the viewpoint of most end users, the fact that a commercial calibration standard for a particular compound is truly not available—as opposed to being expensive or cumbersome—is of little consequence. Still, some end users will ask us how we test and calibrate such instruments at our factory.

The concept is simple enough, although the practice takes both art and science. For both hydrogen peroxide and peracetic acid, methods are developed to generate the compound from reagent grade sources, whereupon the airstream is diluted—controlled by mass flow controllers, in a stable temperature environment. The output of the generator is then analyzed via appropriate wet chemistry techniques, and if suitable, is used immediately.

First of all, an interference such as SO2 will likely not have the same response characteristics across the full H2O2 measuring range, introducing a random error. Moreover, there is no guarantee that this factor will remain constant for the life of the sensor. In short, surrogate calibration is almost never a good idea.

Quoting again from ASTM D3249: “In all cases, standard used for calibration purposes must be as representative as possible of the atmosphere to be analyzed…”