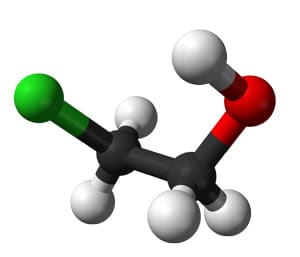 Ethylene chlorohydrin, aka 2-Chloroethanol, 2-Chloroethyl alcohol, and ethylene chlorhydrin, is a colorless liquid with an ether-like odor. The compound has a boiling point at 760 mm Hg of 262 °F (128.6 °C). It is used in the manufacture of dye intermediates, pharmaceuticals, plant-protecting agents, pesticides and plasticizers.
Exposure routes include inhalation, skin absorption, ingestion, skin and/or eye contact. Ethylene chlorohydrin is considered quite toxic, with an IDLH of only 7 ppm. The OSHA PEL is 5 ppm; the NIOSH REL and ACGIH TLV are both 1 ppm as a ceiling value.

Unlike most common toxic gases, ethylene chlorohydrin has a high boiling point, and is present as a liquid in normal circumstances. Certainly, even at room temperature there is a vapor phase, and if using this compound, precautions must be taken.

Ethylene chlorohydrin is also of interest in the matter of ethylene oxide (EtO) sterilization. Steris lists possible residuals that can form in the EtO sterilization process:

Per the AAMI 10993-7 standard, “No exposure limits are set for ethylene glycol because risk assessment indicated that when EO residues are controlled, it is unlikely that biologically significant residues of EG would be present.” Ethylene glycol is not a genotoxin nor is it considered to be a carcinogen, thus the need to monitor for EG is not critical. The primary concern is to ensure the EtO and ECH residues are within the allowable limits.

As to ECH residue, validation tests are performed to determine the likelihood of the residue on candidate medical devices. The good news is that such tests have been performed on hundreds of devices, using various brands of modern EtO sterilizers, and ECH residues are rarely an issue.