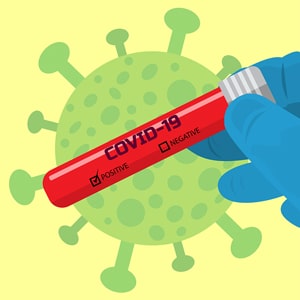 PLEASE NOTE:  We are NOT the manufacturers of the swabs, and we do not perform ethylene oxide sterilization.

During the great COVID-19 pandemic, millions of people are being tested to see if they are infected with the virus SARS-CoV-2. The test involves a sample being taken deep into a nasal cavity, using a medical swab. Naturally, a sterile swab must be employed, and these devices are sterilized with ethylene oxide in large batches. The sterile swabs are then shipped to contract warehouses, strategically located around the country.

Ideally, these sterile loads should be aerated for a number of hours, but the pandemic and the attendant and growing desire for testing inevitably means that corners may sometimes be cut. Thus, there is a concern on the part of both the warehouse operators and swab manufacturers regarding the potential exposure of their employees to toxic levels of ethylene oxide.

Both the leading manufacturer of medical swabs and the largest operator of medical warehouses are our valued customers. It was up to us to guide them on proper monitoring methods, to assure their employees that the work environment was safe.

These points are important, since in their survey work around the facility using one of our portable gas analyzers, instantaneous readings coming off a particular package of the swabs might show more than 1 ppm. In extreme cases, goods still inside the truck coming from a nearby sterilization facility might even exhibit a higher concentration. But, these are point sources, and such readings do not represent actual prolonged employee exposure.

It was recommended that, to the greatest extent possible, goods should not be released from the contract sterilizer without adequate aeration time. Absent that, the trucks would not be allowed to load into the warehouse until a reading inside the truck under 2 ppm was obtained.

Once the goods are put into the warehouse, monitoring should be done around the facility, and any hotspots noted. Bear in mind that unless protracted aeration times are enforced—and there are practical imitations to this—most packages will show a small residual of ethylene oxide. Given reasonable ventilation in the warehouse, such hotspots are unlikely to affect overall employee exposure. Still, people need reassurance. That’s why we also recommended putting ethylene oxide exposure badges on all employees that might have the greatest chance of exposure to the sterilized swabs.

This combination of survey work with an instrument and badging of certain employees has worked well for both the swab manufacturer and the warehouse operator.