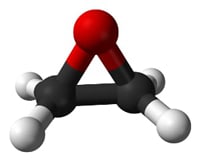 Ethylene oxide is the most widely used low temperature sterilant, and it is still the dominant process used by the medical device industry, owing to its effectiveness and compatibility with most materials. First employed as a fumigant in the 1920s, it was developed as a sterilant in the 1940s by the US military. With the advent of the McDonald process, by the early 1960s, EtO was introduced into the medical device market.

While 100% EtO sterilization was always common in industrial applications, blends of EtO and various inert gases (carbon dioxide, fluorocarbons, and then hydrofluorocarbons) were deployed until the Montreal Protocol ordered a phase-out. At this point, essentially all EtO sterilization uses 100% gas. For medical applications, it is deployed in either a cartridge or via the flexible chamber system.

Hydrogen peroxide has been widely used as a topical antiseptic–as a 3.5% aqueous solution, and is deployed in the vapor form for room decontamination. In the early 1990s, a sterilizer utilizing hydrogen peroxide gas plasma was introduced, followed some years later by a competitive model. These systems are primarily intended for the hospital market.

Peracetic acid was first registered by the EPA as an antimicrobial in 1985. PAA is widely used in food and agriculture, and has seen significant applications in healthcare, especially with automated endoscope reprocessors. Although included in this write-up on sterilants, technically, peracetic acid is a high-level disinfectant.

Please contact us for additional guidance on dealing with these sterilants.