A Look At Candida auris 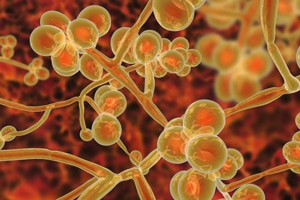 A Look At Candida auris

Webster’s Third New International Dictionary, Unabridged defines “superbug” as “[A] pathogenic microorganism and especially a bacterium that has developed resistance to the medications normally used against it. In 2017, this column discussed one notorious such bug—methicillin-resistant Staphylococcus aureus (aka MRSA)—and how an outbreak was covered up by a major medical center.

This week, though, our superbug is not a bacterium, but rather is a fungus—more specifically a yeast, a microscopic fungus, which comprises a single, oval-shaped cell, that reproduces through budding. There are hundreds of species within the genus Candida, many of which belong to the normal microbiota of the human oral cavity, gastrointestinal tract, and vagina. Most of these organisms are commensal but others may cause systemic infections—generally in immunocompromised situations.

At least 15 species of Candida are known to be infectious agents in humans, and 90% of the infections are caused by a group of five species headed up by the familiar baddie Candida albicans.

As to Candida auris, the yeast was first described upon its isolation from the ear canal of a 70-year-old Japanese woman at the Tokyo Metropolitan Geriatric Hospital in Japan in 2009. Hence, the “auris,” not to be confused with the “aureus” in MRSA.

Our CDC explains why C. auris is such a problem…

1.     It causes dangerous bloodstream infections, particularly in hospital and nursing home patients with serious medical problems. More than one in three patients so infected will die.

3.     It’s becoming more common. This superbug has spread quickly and caused infections in more than a dozen countries.

4.     It’s difficult to identify. C. auris can be misidentified as other types of fungi unless specialized laboratory technology is used. This misidentification might lead to a patient getting the wrong treatment.

5.     It can spread in hospitals and nursing homes. The yeast has caused outbreaks in healthcare facilities and can spread through contact with affected patients and contaminated surfaces or equipment. Good infection control practices are essential since C. auris can live on surfaces for several weeks.

The linked CDC webpage detailing these concerns (last updated on December 21, 2018) notes that “C. auris is still rare in the United States.” Or not…

Multiple media sources identified the nation’s first two cases of C. auris infection as occurring in New York City. However, healthcare improvement advocate Betsy McCaughey notes that “Over half the nearly 600 cases nationwide are right here, mostly in New York City. New Jersey hospitals are also hard hit, with more than 100 cases so far. A staggering 45 percent of patients who get it die within 90 days.”

In the same article, McCaughey decries the secrecy all too commonly involved during outbreaks of infection:

“Hospitals, state health departments and the Centers for Disease Control and Prevention are putting up a wall of silence to keep the public from knowing which hospitals harbor Candida auris.”

“Public health officials lamely claim disclosing the outbreak could discourage patients from getting care. Nonsense. There are more than 50 hospitals in New York City. Fewer than half have been invaded by Candida auris. Consumers armed with the facts can go down the street to a different hospital.”

This secrecy was also recounted in the sad story of 64-year-old C. auris victim Stephanie Spoor’s unsuccessful battle with the superbug…

Northwestern Memorial declined to answer any questions from The Times about Ms. Spoor’s case, despite receiving permission from the Spoor family to cooperate. The hospital also declined to respond to questions about how many C. auris cases it has treated, whether there were any current cases, what precautions it was taking and other queries.

“After careful consideration, we are going to pass on participating in this story,” Christopher King, a hospital spokesman, wrote in an email in response to questions.