A Look At Volcanoes 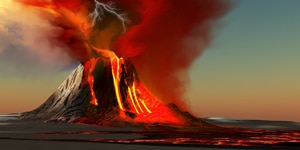 A Look At Volcanoes

Recent activity at Kilauea, on the big island of Hawaii, has sparked new interest in this seismic phenomenon.

A volcano is a vent in the Earth’s crust, from which issue eruptions of molten rock (magma), hot rock fragments, and hot gases. Strictly defined, “volcano” refers to the vent from which magma and other substances erupt to the surface, but it can also refer to the landform created by the accumulation of solidified lava and volcanic debris near the vent. “Lava” is magma that reaches the surface of our planet through a volcano vent.

An “active” volcano has had at least one eruption in the last 10,000 years, and may be dormant or erupting. An extinct volcano has not had an eruption for at least 10,000 years and is not expected to erupt again in a comparable time scale of the future. Kilauea is one of the most active volcanoes in the world, having a continuous eruption that started in 1983. Kilauea is a “shield” volcano, which is wide volcano with shallowly-sloping sides, formed by lava flows of low viscosity. That is, it looks like a “typical” volcano.

According to the United States Geological Survey (USGS), there are about 1500 active volcanoes worldwide, with 169 in the US. If you need more drama, a report issued by USGS in 2005, entitled “An Assessment of Volcanic Threat and Monitoring Capabilities in the United States: Framework for a National Volcano Early Warning System” identifies 18 volcanoes comprising a group having “very high” overall threat scores; and 37 volcanoes comprising a group having “high” scores. These scores are based on 15 hazard and 10 exposure factors, detailed in the report.

The late UC Santa Barbara geologist Richard V. Fisher described several hazardous events that can be caused by a volcano:

** Lahars — part of the family of debris flows that are fluids composed of mixtures of water and particles of all sizes from clay-size to gigantic boulders.

** Debris-flow Avalanches — avalanches that develop from the collapse of parts of volcanoes.

** Lava flows — usually move slowly enough to be avoided, but not always. Can also cause floods and lahars by melting ice and snow.

** Tephra (pyroclastic material) falls and Ballistic Projectiles — Impact force can be devastating; structures and land can be buried; fine-grained particle suspensions can harm lungs, and foul all types of mechanical equipment.

** Tsunamis — Caused by sudden displacement of water. A prime example is the eruption of Krakatua in 1883, which produced a tsunami that killed more than 36,000 people

** Volcanic Gas — Magma contains dissolved gases including water vapor, carbon dioxide, carbon monoxide, sulfur dioxide, hydrogen sulfide, chlorine, and fluorine. The latter five gases are toxic and are being extensively monitored at several locations, including Kilauea, by USGS. Carbon dioxide is a simple asphyxiant, and if present in sufficient amounts can displace enough oxygen to be lethal. The 1986 Lake Nyos disaster provides a tragic example of this occurrence.

Here is a map of the air monitoring stations at Hawai’i Volcanoes National Park. Both sulfur dioxide and particulate matter are being monitored. The USGS has been using Interscan sulfur dioxide analyzers for more than 20 years at Kilauea and other locations. USGS also uses the company’s hydrogen sulfide analyzers.

The USGS has produced several reports on volcanic gas emissions, including “Sulfur Dioxide Emission Rates from Kïlauea Volcano, Hawai’i, 2007–2010,” and this book chapter.

Grant McClure, Interscan’s manager of special projects, told me that “Interscan is proud of its long relationship with USGS, and will continue to support this agency as it protects the public, by monitoring the air for toxic gases.”