Should You Be Afraid Of Diagnostic X-Rays?

Should You Be Afraid Of Diagnostic X-Rays? 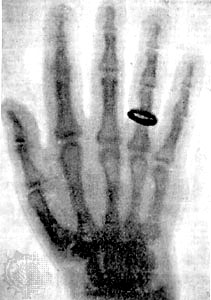 Articles have been appearing in medical and dental trade magazines regarding patients who are refusing X-rays. In fact, the websites of many dentists devote a page or two to allaying patient fears, and noting how essential this diagnostic tool really is.

The discovery of X-rays dates back to 1895, when German physicist Wilhelm Konrad Röntgen was examining the effects of electron beams in electrical discharges through low-pressure gases. He soon observed that opaque objects placed between the radiation source and a screen, that would fluoresce in the presence of the rays, were effectively transparent. In 1896, he published the famous and dramatic image of the bones of a human hand.

Some time later it was determined that X-rays are electromagnetic radiation of extremely short wavelength (about 1000 times shorter than that of visible light) and high frequency, with wavelengths ranging from 10-12 to 10-8 meters and corresponding frequencies from 1016 to 1020 hertz (Hz).

X-rays (also called radiographs) are most popularly taken to:

While few would deny that X-ray and its more advanced cousin computed tomography (CT) are essential tools of modern medicine, a selective amnesia akin to those against vaccinations—after previously killer infectious diseases have been controlled—poisons the minds of a vocal few. Unfortunately, these few can draw support from a potpourri of radiation fears, cancer fears, pseudo-science, and the legitimate danger of large radiation exposures.

Indeed, you may have heard that even the smallest amount of radiation might cause cancer. Or, that the risk of causing a fatal cancer from a single chest X-ray is 10 times greater than the risk of dying in a commercial airline flight. Or, that a CT scan of the kidneys has a greater risk of inducing a fatal cancer than a cigarette smoker has of dying from any cancer.

Sadly, these nonsensical statements—and others like them—derive from the exposure model known as linear-nonthreshold dose-response. It assumes that there is no safe dose of radiation, and that the risk of getting cancer or genetic damage increases along with radiation exposure. Of course, the most immediate problem with this is that for most people, the greatest source of exposure is the natural environment, and regulatory levels are being set below the background.

Listen to Dr. John Boice Jr., a radiation expert, who is the scientific director of the International Epidemiology Institute:

Another problem with linear-nonthreshold dose-response is that it was based on the rather simplistic 1927 conclusions of geneticist Dr. H. J. Muller, who elicited gene mutations in fruit flies by bombarding them with X-rays. The number of mutations in fruit flies was proportional to the dose of X-rays. However, Muller used extremely high levels of X-rays, and caused mutations, not cancer.

Moreover, while cancer etiology can be tied in with initially high and proportionately higher dosages of radiation, about one-third of the population gets cancer. The huge difficulty is finding any evidence that low doses of radiation cause cancers that would not have otherwise occurred. Bear in mind that even in the cohort of survivors of Hiroshima and Nagasaki, few excess cancers have been detected.

Certainly, there are special situations such as pregnancy, where one has to be careful, and excellent guidelines are given on the RadiologyInfo website, developed and funded by the American College of Radiology (ACR) and the Radiological Society of North America (RSNA).