Should You Be Afraid Of New Car Smell?

Should You Be Afraid Of New Car Smell? 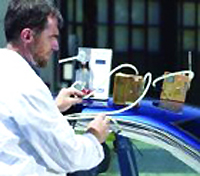 A recent entry in the seemingly endless cavalcade of technology-based “dangers” to our health, proffered by yet another self-appointed guardian of our welfare, is the well-known and generally liked “new car smell” (NCS).

While the exact composition of NCS will vary, consider that the interior of a car contains a good deal of plastic; and many adhesives, sealants, and solvents are utilized. The carpet will harbor a host of chemicals, as well. As they outgas, the chemicals can build up in a car’s interior, and can often fog up the inside of the windshield.

You may have heard that phthalate plasticizers, used to soften vinyl and other plastics, are a key component in NCS. As it happens, phthalates have little or no odor, and are not very volatile, either.

Collectively, the substances of interest are known as volatile organic compounds (VOCs), and their presence has been quantified—more or less—in a few studies. For the record, phthalates were not detected in any of these investigations.

In December 2001, a study was released by Australia’s Commonwealth Scientific & Industrial Research Organization (CSIRO). This work measured VOCs in three new 1998 vehicles, using gas chromatography/mass spectrometry analysis of air samples taken from the cars after they had been sealed for several hours. Measurements continued at varying intervals for two years.

While the total VOCs in the cars started off at a level significantly higher than what you might find in a new building, the levels dropped off substantially in a few months. CSIRO noted that not all of the VOCs measured derive from the passenger compartment. Certain compounds such as benzene can come from the fuel or exhaust.

Of course, nearly all occupancies will experience a build up of nasty chemicals if ventilation is prevented. Sick building syndrome, anyone?

In March of 2007, an outfit calling itself The Ecology Center released a highly-publicized study of NCS that went so far as to rate the 10 best and 10 worst cars for interior toxics. To call the methodology “flawed” would be an understatement. Even though the news release published on March 20th stated that “Over 200 of the most popular 2006 and 2007 model vehicles in the US were tested for chemicals that off-gas from indoor auto parts…” in fact, this was not done.

The Center used a portable X-Ray Fluorescence analyzer to determine the ELEMENTAL composition of various objects in the interior, including steering wheels, armrests, seat surfaces, and carpet. Once the elements were identified, the group simply speculated as to what chemicals COULD be present.

For example, the element chlorine was identified. From this, an extrapolation was made to polyvinyl chloride, and from that, an attack was launched on the phthalate plasticizers—a favorite whipping boy of various enviro groups. As we already noted, no study, including this one, actually measured or detected phthalates in the passenger compartment of a vehicle.

Certain elemental metals were detected, and although no attempt was made to extrapolate this data to name specific compounds, many generic toxic and allergenic effects were mentioned, even as beneficial attributes of the metals were also listed. Please note that this study did NOT measure the air in the passenger compartment for any compound—toxic or otherwise—and in our judgment over-presented the data it actually obtained.

Perhaps the best study run on the toxicity of NCS was done in Germany (published in April, 2007) by a multi-disciplinary team headed by renowned toxicologist Jeroen T. M. Buters, of the Technical University Munich.

In this effort, the researchers collected VOCs from the air inside a new vehicle and a three-year-old vehicle, with identical interiors. A “parked in sunshine condition” was simulated by exposing the vehicles to 14,000 watts of light, via 28 halogen lamps. Numerous sensors were placed in each vehicle, and the illumination was adjusted to maintain an interior temperature of 65° C (149° F). Specific concentration data was obtained on nearly 50 compounds.

Extracts from the air samples were tested on cultures of human and hamster cells typically employed to determine toxicity. A slight but statistically significant aggravating effect on IgE-mediated immune response of only the new vehicle indoor air was identified, and this could be relevant for sensitive individuals. Beyond that, there were no indications of toxicity.

As the study concluded:

“Our investigations gave no indications for an apparent health hazard of parked motor vehicle indoor air.”

As is so often the case, when good science is done, the hysteria disappears.