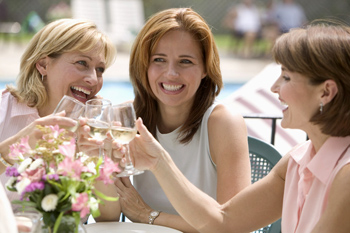 Many of you are familiar with the so-called “French Paradox,” whereby the French, who have a diet higher in saturated fats than the typical American, have a lower rate of coronary heart disease. Although this phenomenon was observed in the 19th century, the term was popularized by Serge Renaud, a Ph.D. veterinarian from France.

Renaud was featured on a 1991 broadcast of CBS’ “60 minutes,” and he not only solved the paradox by pointing out that the French drink plenty of red wine, he also later claimed—quite outrageously—that…

“There is no doubt that a moderate intake of wine (one to three glasses per day for a man) is associated with a 30- to 40-percent reduction in mortality from all causes.”

With that, sales of red wine soared in the US, and there was a move to promote wine as a sort of new health food. In fact, various trade and medical societies still exist to tout the supposed benefits of wine consumption.

It should be noted that many researchers, including two who were involved in early French paradox studies, have backed way off from the original concept. A follow-up article, appearing in the January 1, 2000 issue of The Lancet, quoted leading French scientist Pierre Ducimetière…

Dr. Michel de Lorgeril, a former colleague of Renaud’s, added that “The French Paradox cannot be explained only by alcohol, and there is no consensus to say that alcohol consumption in moderation is protective.”

Besides the possible under-counting of coronary disease deaths in France, other factors explaining the paradox include…

Complicating this further are results from the large Nurses’ Health Study, which suggest that fat (except for trans fat) may not have much effect on heart disease, and that women who drink moderate amounts of alcohol (1-3 drinks per week) cut their risk of heart attack in half, but increase their risk of breast cancer by one-third.

Low to moderate alcohol consumption among women is associated with a statistically significant increase in cancer risk and may account for nearly 13 percent of the cancers of the breast, liver, rectum, and upper aero-digestive tract combined.

These findings appear in the February 24, 2009 online issue of the Journal of the National Cancer Institute.

A total of 1,280,296 middle-aged women (aged 50 and over) in the United Kingdom enrolled in the Million Women Study were routinely followed for incident cancer. On average, the women consumed one drink per day, and the type of alcoholic beverage consumed did not alter the relationship between consumption and cancer risk. Within this large cohort, 68,775 women were diagnosed with cancer.

In a related article in the same issue of the Journal, Michael Lauer M.D., and Paul Sorlie, Ph.D., of the National Heart, Lung, and Blood Institute, state—rather alarmingly—that “From a standpoint of cancer risk, the message of this report could not be clearer. There is no level of alcohol consumption that can be considered safe.”

I would add a few remarks. Statistical data is one thing, but mechanistic explanations would be far more convincing. In the case of breast cancer, one theory is that alcohol interferes with estrogen metabolism, which in turn increases the risk of hormone-sensitive breast cancer—although there are breast tumors that are not hormone-related, as well. Mechanisms for incidence of the other cancers (besides liver cancer) to increase have not been proffered.

In a study as large as this one, there is always the possibility that a “cause” can simply be a marker. For example, is it possible that women who drink lots of alcohol may not embrace various aspects of a healthy lifestyle? What are their diets like? Do they exercise?

Moreover, how many of the women who admit to three drinks per day or nothing at all are telling the truth, but may not mention that they consumed copious quantities earlier in their lives? With a cohort starting at age 50, are there already other factors that have made their indelible impression on a woman’s health that cannot be erased?

As they say, more study is needed, but I never really thought of alcohol as a health food.