Another Look At Stress

Another Look At Stress 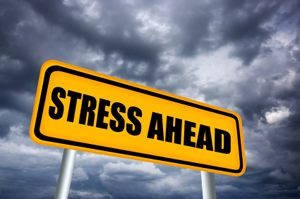 A few years ago, this column ran a piece on how chronic stress can adversely affect your health. Stress—in any form (whether acute, chronic, or traumatic)—activates the fight-or-flight response of the sympathetic nervous system. This response initiates the release of the adrenal hormones epinephrine (adrenaline), norepinephrine, and cortisol.

Among other things, chronic stress promotes hyperglycemia and hypertension, both of which can lead to cardiovascular disease. Since norepinephrine is a neurotransmitter, conditions such as mood swings, depression, and anxiety can be triggered. If that weren’t bad enough, high levels of cortisol have been identified with weight gain—especially the accumulation of abdominal fat.

These days, few people doubt that chronic stress is bad for you. The problems begin when we try to directly link cause and effect. Indeed, this is by no means a trivial matter in any aspect of medicine, and the search for the elusive vera causa (Latin for true cause) is as old as the healing arts themselves.

A classic example is the case of tuberculosis. For the better part of the 19th century, it was thought that crowded and unsanitary living conditions were its cause. On a superficial level, this was true, since remediation of such situations significantly reduced the incidence of the disease. It would take the bravura work of Nobel Laureate Robert Koch, published in 1882, to identify Mycobacterium tuberculosis as the pathogen causing the dread illness.

However, while this bug must be present for the disease to exist, its mere presence does not always produce the symptoms. Famed physician Sir William Osler (1849-1919) believed that stress was especially important in tuberculosis, in that it would depress the immune system. He remarked that it was more important to know what went on in a man’s head than in his chest, to predict the clinical course of TB.

As an aside, one is rarely able to mention two of the greatest physicians of all time within the span of a couple of paragraphs.

Further to the matter of stress causing—or at least highly promoting—diseases, we refer to a landmark study, that doesn’t seem to get the publicity it deserves. Appearing in The New England Journal of Medicine, in its August 29, 1991 edition, it is entitled “Psychological Stress and Susceptibility to the Common Cold.”

In this work, upon completion of questionnaires assessing degrees of psychological stress, 394 healthy subjects were given nasal drops containing one of five respiratory viruses, and an additional 26 were given saline nasal drops. The subjects were then quarantined and monitored for the development of evidence of infection and symptoms.

The well-controlled finding was that psychological stress was associated in a dose-response manner with an increased risk of acute infectious respiratory illness, and this risk was attributable to increased rates of infection rather than to an increased frequency of symptoms after infection.

Subsequent research, including a paper from April, 2012, in the Proceedings of the National Academy of Sciences, entitled “Chronic stress, glucocorticoid receptor resistance, inflammation, and disease risk,” echoes the 1991 results. Can we then conclude that since cold viruses are around us all the time, “something” additional is increasing our risk in actually catching the cold? Yes, but…

In a complex biological system, it is more appropriate to speak of risk factors and dose-response, rather than simple cause and effect. Even with the relatively simple matter of acute poisoning, while we can be certain that given enough cyanide, anyone will die, toxicologists prefer to discuss the LD 50 (median lethal dose).

Moreover, in perhaps the best-established risk factor for a serious disease—namely smoking and lung cancer—”only” 90 percent of cases can be attributed to smoking, with a fairly linear dose-response relationship. However, it is not being overly “meta” to ponder if stress is causing someone to smoke in the first place.

Stress reduction techniques are readily available, of course. A few places to look include the Mayo Clinic, and WebMD. Try rating yourself on Sheldon Cohen’s Perceived Stress Scale.

Finally, people also turn to pharmaceutical and herbal stress-relievers. Steve Curtis is the founder of Zen’d Naturals Ltd, whose flagship product, Zen’d, is an all-natural, anti-anxiety drink that is said to reduce stress, and improve mental focus and personal effectiveness. Steve definitely walks the walk…

I created Zen’d after being diagnosed with and beating cancer. My journey introduced me to great scientific and spiritual minds and I learned about the effects of stress on our bodies and the ancient connection between plants and human health. Each bottle of Zen’d contains this herbal intelligence and also offers you a personal challenge to bring more happiness into your life and into the world.

Our proprietary blend includes the highest quality kava root, which is scientifically validated for therapeutic stress relief by clinical studies at Duke University, recognized by Germany’s Commission E (their FDA equivalent) and endorsed by the American Herbal Products Association.

While much of this article cautions against simplistic pronouncements, it is prudent enough to say this: Manage stress, or resign yourself to a shorter and less enjoyable life.