Another Reason Not Mess With Meth 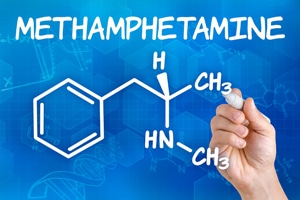 Another Reason Not Mess With Meth

Amphetamine was first synthesized in 1887, and the more potent methamphetamine a few years later, in 1893. It would not be until 1934 that amphetamine appeared as a pharmaceutical drug, introduced by Smith, Kline, and French in their Benzedrine inhaler. In 1937, Benzedrine sulfate came on the market, for indications including narcolepsy, obesity, low blood pressure, low libido, and chronic pain. Both amphetamine and methamphetamine were used extensively by combatants on both sides in World War II, for performance enhancement. Owing to their addictive properties, both drugs are classified as Schedule II controlled substances.

In general, the side effects of both drugs are the same, although they are much more pronounced with meth, and at lower doses. These include: appetite loss; heartbeat abnormalities and increased risk of heart attack; hypertension; and insomnia—in the short term. Long-term use of meth has devastating consequences, including cardiac arrhythmia, hyperthermia, marked malnutrition and, in severe cases, starvation.

We refer to a review article just published in the Journal of Neurology, Neurosurgery & Psychiatry, entitled “Stroke and methamphetamine use in young adults: a review.” I’ll let lead author Dr. Julia Lappin of Australia’s University of New South Wales set the tone:

“Methamphetamine users and their communities should be aware that stroke can occur in young people within hours or days of use, and also as a long-term consequence. A key feature to look out for is the sudden development of a headache, which is often extreme. Other signs include confusion, numbness or loss of function down one side of the body, and problems with speech and vision.”

The 80/20 rule is in effect here, when considering all age groups: Ischemic strokes comprise 80% and hemorrhagic 20% of strokes. As it happens, though, in younger people, the numbers are different. A greater proportion are hemorrhagic (33.5% in those 20-44 versus 23.1% in those 45-54). For the record, in the “Discussion” portion of the paper, the authors cite other figures—hemorrhagic stroke in populations below 45 years at 40%-55%.

As revealed in this paper, those strokes associated with meth use were 80% hemorrhagic. As to additional disturbing findings…Complete recovery was achieved in less than a quarter of cases. One-third of hemorrhagic strokes and one quarter of ischemic strokes resulted in death. The remainder of individuals suffered a range of disability.

The authors postulate that minor transient cerebrovascular events resolving spontaneously would not result in help-seeking in this population, so the cases reported in the literature may reflect the more severe end of the spectrum. Still, the results of meth users are drastically worse, compared to the full cohort of all-cause stroke patients aged 16-45 years, in whom an outcome of absence of symptoms is achieved by approximately two-thirds with a much lower death rate (3%).

Breaking meth addiction is notoriously difficult. One wonders if scaring users with all the relatively fast-occurring associated health problems could provide an incentive to quit.