Betrayal Of The Public Trust…And How To Fight Back 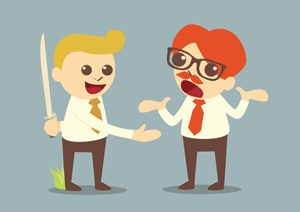 Betrayal Of The Public Trust…And How To Fight Back

Last week’s article, which detailed officialdom’s unrelenting war on e-cigarettes, generated plenty of e-mail and commentary–100 percent of which was favorable. Many commenters were truly dismayed how the public trust could be betrayed by money, egos, fanaticism, or a combination of the three. Others asked how they could fight back; more on that later.

As to the California Department of Public Health, this farcical agency seems hell-bent on channeling Joseph Goebbels as it doubles down on the big lies introduced in its Protect Your Family From e-Cigarettes pamphlet discussed last week. A few days ago, it issued State Health Officer’s Report on E-Cigarettes: A Community Health Threat.

This latest salvo is little more than a built-out version of the pamphlet, replete with dozens of dubious references; toxicology that wouldn’t pass muster at a junior high science fair; hackneyed appeals to “save the children”; and lurid photos inspired by Reefer Madness. There are also cockamamie citations on “nicotine poisoning,” which in many cases are nothing more than casual inquiries to poison control centers; and further demonization of nicotine, which somehow is quite all right when contained in a Big Pharma product. Lest we forget, they repeat the outrageous lie that e-cigs don’t help people quit smoking.

“The California Department of Public Health is now protecting cigarettes and threatening the lives of vapers and smokers. Nearly every sentence in the CDPH e-cig report is false or misleading fear mongering propaganda. By issuing this report, Ron Chapman (CDPH Director) has committed public health malpractice of the worst kind.”

Well said, but the attack on e-cigs is by no means the extent of the bad medicine being promulgated by officialdom every single day. This column has discussed the Establishment’s ghoulish adherence to the ruinous low fat/high carb diet, which beyond any doubt is the cause of the current epidemic of obesity and type 2 diabetes. Likewise, we have examined the truly deranged insistence on a low sodium diet, despite hundreds of studies proving its ill effects. Similarly, we have covered the long-discredited (but still aggressively promoted) cholesterol theory of coronary heart disease, and the questionable value of statin drugs.

As cardiologist and author of The Cholesterol Delusion Ernest N. Curtis puts it, “[R]edefinition can be used to create the appearance of a problem where none really exists.”

Forty years ago the normal range for an individual’s blood cholesterol level was 150-350 mg/dL. Over the past 20-30 years this “normal” level has been ratcheted down so that the highest number considered to be normal or “acceptable” is now 200 mg/dL or less. Of course, the net effect of this is to create a large number of “patients” out of the normal healthy population. And of course all these new patients need “treatment” in order to reduce their cholesterol down to the new “acceptable” levels. Most people naturally assume that these changes were made in response to new scientific data showing that these lower levels would significantly reduce the risk of heart disease. Nothing could be further from the truth.

Curtis explains that the “expert” panels responsible for these changes were essentially echo chambers of individuals whose careers were closely tied to the cholesterol theory and many had financially remunerative relationships with drug companies and other groups with a vested interest in expanding the public’s anxiety over cholesterol and heart disease. The same story applies to blood glucose levels and blood pressure numbers. Surely, this is a big reason behind the astonishing statistic that 90% of Americans over 65 are on some sort of regular medication.

Fighting back consists primarily in confronting establishment figures with the pure scientific facts, ideally in popular talk show settings. This must be done with a hard edge, as the time for polite, respectful discourse has long passed. After all, these “experts” have no respect for your health, and deserve no such deference. Class action litigation is a possibility, mostly as a tool to garner publicity. Legal victories will be difficult, in that they will become a battle of the experts, and too many of the highly credentialed experts are on the Establishment’s payroll.

Perhaps, the e-cig overreach is a portent of the Establishment’s fall. Undeniably, they have much to answer for.