Bisphenol A, Endocrine Disruptors, Baby Bottles, And You

Bisphenol A, Endocrine Disruptors, Baby Bottles, And You 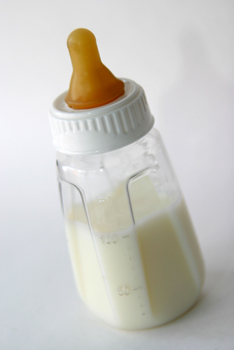 Bisphenol A (BPA) is an important industrial chemical primarily used in the manufacture of polycarbonate—a widely used plastic, and as a key constituent of epoxy resins—employed as protective coatings on metal food and beverage cans.

Perhaps the most widely studied endocrine disruptors are those that mimic estrogens. BPA—in high enough doses—is a proven endocrine disruptor in rodents. There is no corroborating data in humans. Moreover, it is well known that rodents are far more sensitive to these chemicals than humans. Much data is available on how numerous chemicals affect the thyroid, another endocrine gland, in humans and rodents.

As it happens, numerous drugs in common use produce adverse thyroid effects in rodents, but not in humans, including CNS-acting drugs (phenobarbital, benzodiazapines), calcium channel blockers (nicardipine, bepridil), antihistamines (doxylamine succinate), and steroids (spironolactone). For all of these drugs, a listing of possible side effects does not include adverse effects on the thyroid.

In September, 2008, the National Institutes of Health published a comprehensive study entitled “NTP-CERHR Monograph On The Potential Human Reproductive And Developmental Effects Of Bisphenol A.” The principal findings are as follows:

Frederick vom Saal and others have held that low-dose exposure to BPA can cause health effects by disrupting endocrine functions. However, their results have never been replicated, and were not consistent.

Nonetheless, BPA was branded as dangerous, and about one year ago, Canada became the first country to ban it from use in baby bottles. Several other jurisdictions, including Suffolk County, New York, have banned BPA, and there seems to be an overall nationwide movement to get rid of the chemical in infant feeding items. To be sure, the most damaging effects of BPA—and many other compounds—occur in utero or in neonatal situations.

But if we are going to worry so much about the baby bottle, why are we not concerned about what it contains?

Many mothers choose soy-based formulas, and soy contains genistein—a phytoestrogen, and a more potent endocrine disruptor than BPA. Human milk also contains small amounts of genistein. It is very likely that the endocrine disrupting potential of the formula is far greater than what could come from a nipple or bottle with BPA. Note that endocrines or endocrine mimics act on specific receptors in the cell, and these receptors have no preference for “natural” or synthetic disruptors.

Make no mistake that phytoestrogens can have quite an effect: There have been reports of sheep and other ruminants being rendered infertile by consuming clover in pasture. On the other hand, in cultures that eat a lot of soy, rates of breast and prostate cancer are lower. As such, a health-protective effect is being generated by an endocrine disruptor. Phytoestrogens, of varying potency as disruptors, appear in many other foods.

The BPA-banners don’t often speak of other “expert advice” that involved an endocrine disruptor far more powerful than BPA, and given in massively larger doses to as many as five million pregnant women, from 1947 to the mid 1970s. Touted to be a magic elixir to prevent spontaneous abortions, not only was the drug (DES) completely ineffective in this off-label use, it was discovered after the children went through puberty that DES affected the development of the reproductive system and caused vaginal cancer.

Interestingly, where the doses were low, no effects were observed, although the cohort of DES children is still being watched. Remember that these low doses are orders of magnitude higher than any conceivable exposure to BPA.

The expert advice in the late 1940s was to be modern and go with the latest miracle drug, even if common sense always cautioned against drugs in pregnancy. Now the expert advice is to seek out phantom chemical effects, even if common sense tells you rodents are not humans, the dose is infinitesimal, and analogs to the chemicals also occur in nature.

Are we going to violate common sense again?