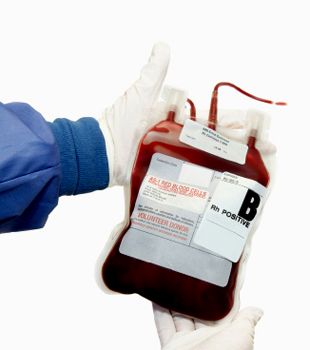 There’s been a run on the banks…blood banks! A dwindling pool of donors nationwide threatens to turn seasonal shortages into a permanent crisis. In areas subject to more than their share of natural disasters—such as Southern California with its earthquakes, fires, and floods—the situation looks like a genuine public health catastrophe waiting to happen.

At the root of the problem, of course, is the American public. According to former US senator Bill Frist, M.D.

“As a physician, I can tell you that we greatly depend upon an ample and stable blood supply. Unfortunately, the nation’s current blood supply is dangerously low. This can have the impact of delaying critical surgeries and medical treatments. Over 60 percent of us are eligible to give blood, about five percent of us actually do.”

The five percent figure reflects a national average. In California—according to the American Red Cross—it is less than three percent. Unfortunately, recent research (see later in this article) suggests that Frist’s 60 percent figure is overstated, not reflecting current restrictions and safeguards.

While developments in synthetic blood are said to be promising, we are a long way from a practical product. Yet, the blood shortage never seems to get the publicity is deserves. One of the reasons for this, frankly, is widespread ignorance about donating blood.

A telephone survey found that:

Typically, the donating process takes only about an hour, but you may help save up to three lives with just one donation. The American Red Cross devotes an entire website to donating blood.

Two of the Top 10 reasons for not giving blood are fear of needles and fear of contracting AIDS. At worst, most donors will feel a slight pinch, and in many cases will feel nothing at all, since the technicians are skillful and experienced. As to AIDS, it is not possible to get AIDS by donating blood to the American Red Cross. A new sterile needle is used for each donor and discarded afterward.

Although the correct description of blood circulation was published by English physician William Harvey in 1628 [Exercitatio Anatomica de Motu Cordis et Sanguinis in Animalibus—An Anatomical Exercise on the Motion of the Heart and Blood in Living Beings] it would not be until 1940 that we would be on our way toward the modern blood-banking system.

It was then that African-American icon Dr. Charles Drew (1904-1950) developed the “Plasma for Britain” program—a pilot project to collect blood for shipment to war torn Europe. Under this program, nearly 15,000 people donated blood, and over 5,600 gallons of blood plasma were delivered. Sadly, Drew was to waste years of his short life over the absurd controversies that erupted over segregating “black” and “white” blood.

Notably, subsequent generations have never matched the World War II era’s enthusiasm for donating blood. And that is bad news considering that an average adult has about 10 pints (4.7 liters) of blood, but a major trauma victim might need as much as 100 pints (47 liters).

For the past 25 years, the public has been far more concerned with blood safety than blood supply, in the wake of HIV-tainted blood infecting more than 12,000 patients nationwide. Today, though, a battery of tests screen blood for HIV, hepatitis, West Nile virus, and other pathogens. A series of questions excludes donors who have visited countries with malaria or mad cow disease.

A study by Dr. Jeffrey McCullough, a professor of laboratory medicine at the University of Minnesota, reports in the July, 2007 issue of Transfusion that 66 million fewer Americans are eligible to donate blood than previously thought—reducing the donor pool from 60% to 38% of U.S. residents.

“The most dangerous unit of blood is the one we don’t have. Not having blood for someone who needs it is worse than giving someone a unit of blood that carries a 1-in-5 million chance of disease.”

“If you are an eligible blood donor, you are now known to be a minority,” Benjamin says. “We strongly encourage eligible donors to step forward and give blood on a regular basis. It is such a precious commodity—and it is getting harder and harder to get.”

There is no other commodity that is at once so precious, but yet so accessible. Do the right thing. Donate blood now.