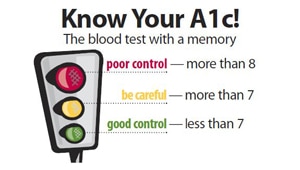 Diabetics know that their blood glucose numbers are important, since all forms of diabetes present as some amount of difficulty in maintaining proper glycemic control i.e. maintaining the blood glucose level. Shamefully, those involved with the relevant clinical assays have not made matters easy to understand. Indeed, many physicians are unclear on the details.

For one thing, two units of measurement are utilized: milligrams per deciliter (mg/dL) and millimoles per liter (mmol/L). There is simply no need to have two units extant, considering that both of them are metric. I suspect the reason that many countries prefer the cumbersome SI units (mmole/L) is because clinical labs in the US tend to employ the conventional (mg/dL) units. To convert from mg/dL to mmol/L, divide the former by one-tenth the molecular weight of the compound of interest. (For glucose, that would be 18.0155899.)

Depending upon the source cited, normal fasting blood glucose (rigorously plasma glucose) falls in the range 70-110 mg/dL (3.89-6.11 mmol/L). A blood glucose level of 126 mg/dL (6.99 mmol/L) or higher after an 8-hour fast, if repeated on a different day, is a definitive diagnosis of diabetes.

However, the blood glucose reading is only a snapshot, reflecting the situation at the precise time the blood is drawn (or the finger pricked and tested with a home meter). Absent outfitting the patient with a continuous glucose monitoring device, the standard method for determining a nominal “average” blood glucose takes advantage of the fact that glucose binds slowly to blood hemoglobin (Hb), producing glycated Hb.

Chromatography of normal adult blood separates two main classes of Hb: HbA (92-94%) and HbA1 (6-8%) where the beta chain of the hemoglobin has an additional glucose group. As it happens, the HbA1c subgroup is the most useful for clinical analysis. With higher blood glucose, more HbA1c will be formed. Red blood cells circulate for 60-120 days, and the HbA1c level is in part affected by blood glucose levels over a three-month period. However, it is heavily weighted to levels over the past 45-60 days.

HbA1c values are reported as the ratio of this particular form of glycated Hb (HbA1c) to total Hb—expressed as a percentage. Depending on the source cited, an HbA1c of 6% or less is normal. Even though you will tend to see these percent values, there is a trend to report HbA1c as mmol HbA1c/mol total Hb. If any readers understand the point of this beyond generating more confusion, please let me know.

By the way, if you would like to perform the conversion, take your old-fashioned HbA1c expressed as a percent, and subtract 2.5. Then take that number and multiply it by 10.929. For example, a 7.0% HbA1c converts to 53.01 mmol/mol.

Inasmuch as HbA1c is weighted to more recent blood glucose levels, it does not represent a true running average, even if studies have shown that broad brush, it is not terribly far off. Still, relating HbA1c values to those readings that are obtained with home meters is not intuitive, say diabetes educators. That’s where the A1C-Derived Average Glucose (ADAG) Study comes in.

The objective of the ADAG Study (2006-2008) was to define the mathematical relationship between HbA1c and estimated average glucose (eAG) and determine if HbA1c could be reliably reported as eAG, which would be in the same units as daily self-monitoring. HbA1c was compared with a combination of continuous glucose monitoring and frequent finger stick glucose measurements. Investigators were able to derive an equation so that HbA1c levels can be interpreted accurately as an average glucose level or eAG.

A formula was derived such that 28.7 times HbA1c expressed as a percentage minus 46.7 = eAG expressed in mg/dL.

It is noted that many assumptions were made to create the eAG formula, and some in the diabetes community are not convinced of its accuracy or utility. Professor Ian S. Young, MD FRCP, of Queen’s University Belfast argues that since no single relationship exists between average glucose and HbA1c, it is not possible to have a single equation that expresses this be applicable to all patients. It is well known, he says, that two individuals with identical glucose profiles over a period of months will not have the same HbA1c.

He also takes issues with the relatively small sample size and the limited numbers of non-Caucasians.

From my vantage point, there does not seem to be a whole lot wrong with conventional HbA1c numbers, used in conjunction with self-monitoring of blood glucose (SMBG)—given the availability of easy-to-use continuous glucose monitors, for those who need them.