Bloodstream Infections And A Promising New Weapon Against Them 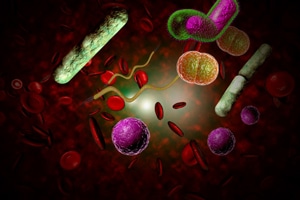 Bloodstream Infections And A Promising New Weapon Against Them

This column has discussed the matter of healthcare-associated infections on several occasions. The most recent such article examined the problems inherent to endoscope reprocessing.

As recently noted by infection control guru Lawrence Muscarella, PhD, a bronchoscope is linked again in the US to an outbreak of the feared CRE superbug. Recalls have been issued by the manufacturer for several models that could apply to thousands of devices in the field.

Bloodstream infections (BSI) are infectious diseases defined by the presence of viable bacterial or fungal microorganisms in the bloodstream (later demonstrated by the positivity of one or more blood cultures) that elicit or have elicited an inflammatory response characterized by the alteration of clinical, laboratory, and hemodynamic parameters.

Most authorities agree that bloodstream infections (BSI) are the most serious form of healthcare associated infection, as they cause significant morbidity and mortality. It is no simple matter to get current statistics on BSI, so we refer to this widely cited CDC page posted in 2011. This article focuses on central line-associated bloodstream infections, which seem to be the type most actively tracked. Here are a few highlights, quoting numbers for the US:

Bloodstream infections also affect pediatric leukemia patients. This study from 2017 followed 186 such patients, all under the age of 18. 115 of these patients (62%) developed a BSI, showing a variety of symptoms ranging from fever to serious systemic complications. There were 12 fatalities (10.4%).

The authors noted that the chemotherapy regimens in these patients caused long durations of profound neutropenia (abnormally low count of neutrophil white blood cells) and resulted in severe inflammation of mucous membranes, leading to increased susceptibility to infection. Early identification of BSI and implementation of empiric antibiotics is essential in managing these patients.

Which brings us to some exciting results just presented at IDWeek 2018 (as in Infectious Diseases). These are findings from the pilot phase study of high-risk pediatric leukemia patients vulnerable to serious, life-threatening infections. The investigators from St. Jude Children’s Research Hospital gave it the acronym PREDSEQ, as in Prediction of Bloodstream Infection Prior to Onset of Symptoms by Plasma Metagenomic Sequencing in Pediatric Patients with Relapsed or Refractory Malignancy.

The work is being done in conjunction with Karius, a life science company, whose motto is “Transforming infectious disease diagnostics with genomics.”

A total of 11 BSI episodes occurred in nine participants during the study period. Predictive sensitivity of the testing in the two days before onset of infection was 78%. Diagnostic sensitivity on the day of infection was 82%. Specificity for development of fever or infection within seven days was 80%. NGS was positive up to six days prior to onset of BSI.

“The results of our study with St. Jude Children’s Research Hospital demonstrate the ability of the Karius Test to identify bloodstream infections prior to clinical symptoms,” said Dr. David Hong, a pediatric infectious diseases doctor and VP of Medical Affairs and Clinical Development at Karius. “The PREDSEQ study to be presented at IDWeek shows the promise that the Karius Test could potentially be used as a monitoring tool in severely immunocompromised children to enable earlier detection of bloodstream infections.”

Anything that can help immunocompromised chemo patients get through this ritual—especially brutal for kids—is truly a blessing.