Where Your Blue Eyes Came From

Where Your Blue Eyes Came From 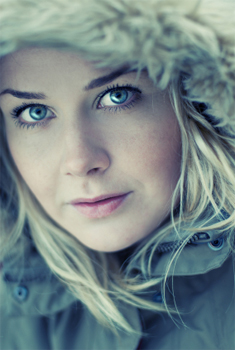 Many articles on Health News Digest concern personal characteristics that people are able to change, such as their weight, muscle development, and overall facial appearance. For once, let’s discuss an attribute that you can’t change: Your eye color.

Eye color exists on a continuum from the darkest shades of brown to the lightest shades of blue. Within this continuum are such types as blue with brown spots, brown-green/hazel, gray, and amber. Variation in eye color—most pronounced in Caucasians—is due to differing amounts and distribution of melanin pigment in the iris. Many of us were taught that brown eyes are a “dominant” trait over blue eyes, but simple observation would indicate that there must be more to the story than such a monogenic inheritance model would suggest.

In 1996, geneticist Hans Eiberg, of the University of Copenhagen, was the first to identify the OCA2 gene as being primarily responsible for eye color. Now, in an article just published in Human Genetics, Eiberg and colleagues demonstrate that people with blue eyes have a single, common ancestor. As Professor Eiberg puts it…

“Originally, we all had brown eyes. But a genetic mutation affecting the OCA2 gene in our chromosomes resulted in the creation of a switch, which literally turned off the ability to produce brown eyes.”

It has been known that the OCA2 gene codes for the so-called P protein, and this P protein is involved in the production of melanin, the pigment giving color to our eyes, as well as hair and skin. Clearly, Eiberg’s switch must provide far finer control than simply on/off, otherwise albinism would result. Rather, this switch somehow reduces the melanin production in the iris, “diluting” as Eiberg calls it, brown eyes to blue.

It is noted that brown-eyed folks exhibit much individual variation as to the DNA locus that controls melanin production.

Eiberg references the classic work of L. Luca Cavalli-Sforza et al. entitled The History and Geography of Human Genes to posit that the mutations responsible for the blue eye color most likely originated from the Near East, or the northwest part of the Black Sea region, where the great agricultural migration to northern Europe occurred in the Neolithic period (6,000-10,000 years ago).

As to the preponderance of blue-eyed people in the Scandinavian and Baltic areas, one theory cites the lack of sufficient sunlight to produce Vitamin D. Lighter skin can absorb more sunlight, and the lower melanin to achieve this is reflected in blond and red hair and blue and green eyes. That blue eyes are an apparently survival-neutral manifestation of sundry mutations that improve Vitamin D synthesis, bespeaks the incredible complexity of the human genome.