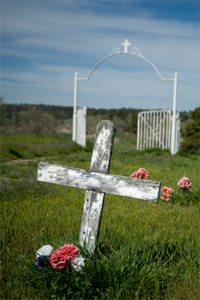 The mainstream media, and thus the general public, would like to believe that major issues for Indians these days involve misappropriation of their symbols by sports teams, how they should best spend casino-driven windfalls, and—perhaps most absurdly—how they should be called “Native Americans” or “First Nations,” even if they themselves use and prefer the term “Indian.”

In a way, this is understandable since the appalling state of Indians’ health is enough to make people recoil in disbelief. Take a look at the Third World within the US that is South Dakota’s Pine Ridge Reservation, with data compiled from various sources by freelance Indian writer Stephanie M. Schwartz:

Compared to the US national average…

Given the astronomical rate of diabetes, diabetic-related blindness, amputations, and kidney failure are all too common. Bottom line, the average life expectancy is 45 years, compared to 77.9 for the US overall.

You might ask how we reached this sad state of affairs, whereby a proud people with a long warrior tradition is seemingly reduced to life of poverty, disease, and despair. How did this people, whose first encounters with Europeans placed them in the role of Macho Host and foster parent—as Comanche pundit David Yeagley puts it—become a hapless client of their conqueror’s ill-fated schemes to help them?

To answer this, we can start by considering the writings of Cadwallader Colden (1688-1776), a Scottish-born physician, farmer, surveyor, and botanist, who eventually became governor of New York. An unabashed Loyalist, he is perhaps best known for his book The History of the Five Indian Nations, which first appeared in 1727. This remarkably detailed work is dedicated to General James Oglethorpe, a founder of Georgia, who also had a keen interest in Indian affairs.

But what, alas, sir, have we Christians done to make them better? We have indeed reason to be ashamed, that these infidels by our conversation and neighborhood, are become worse than they were before they knew us. Instead of virtues, we have only taught them vices, that they were entirely free from before that time. The narrow views of private interest have occasioned this, and will occasion greater, even public mischiefs, if the governors of the people do not, like true patriots, exert themselves and put a stop to these growing evils.

Colden argues that by taking better care of the Indians, they “would become a people, whose friendship might add honor to the British nation.” We can speculate if Colden’s ideas would have had more traction had he been an American patriot and not a Tory.

The Indian tribes may have been conquered, but there are some extraordinary circumstances in play here. The white man’s conquest was subject to treaties, that recognize the nationhood of this people. More than that, the conquerors hold this people in the highest esteem. Indeed, the white man chose to name thousands of political and geographical locations using the original Indian nomenclature. There is no mistaking it: The conqueror cherished these traditions of the natives.

Malcolm Kendrick, Paul J. Rosch, and other medical doctors have made a strong case for stress being a key factor in the development of chronic diseases, as well as heart attacks. It has also been shown that stress related hormones such as cortisol can significantly reduce resistance to infection. There are many triggers for stress, of course, but social isolation is definitely one of them.

What if this social isolation were compounded with stripping away a self-sufficient tradition, and replacing it with a culture of victimhood and dubious entitlement? And what if this so-called entitlement, such as tax-free casinos, were seen as benefiting only a precious few? Do you think that all this might add to the level of stress?

Even more insidiously, the remnants of self-sufficiency, while not operational in a practical sense, can cause some Indians to turn inward. Note that any aspiration that a person might have to improve his health must be based on some goal outside his immediate circumstances. But, facing inward, he is now unwilling to look beyond his confines, and his bad health becomes a terrible self-fulfilling prophecy.

The Indian must get in touch with his uniqueness, his separatism if you will—dearly paid for. He must reclaim the traditions of his ancestors and become a health warrior.