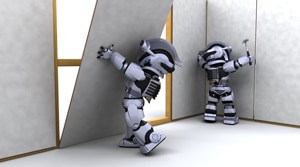 Actually, it never left. Rather, the matter of contaminated drywall from China, affecting hundreds of thousands of homes in Florida and elsewhere, just fell out of the news for a while. Truth be told, Chinese drywall never was a favored topic in the mainstream media, with its largely liberal to Leftist point of view.

After all, the victims were middle class homeowners, and the lead government agency involved (Consumer Product Safety Commission) did essentially nothing to provide any relief to affected homeowners. More than that, the federal court system has been involved for nine years, but few homeowners have been helped. In other words, Big Government largely failed.

The problem with litigation in this case is that the foreign entities named can play the system essentially forever. And going after the Chinese government seems fruitless. As I noted some years ago, in light of the amount of US debt owed to China (estimated at $1.17 trillion), they could respond to any potential judgment with “Deduct it from your balance.”

What the CPSC did accomplish was to sponsor scientific studies of Chinese drywall, including the bravura work done by Lawrence Berkeley National Lab. Part of the LBNL effort was to perform so-called chamber testing on various samples of American and Chinese drywall, whereby they were quantitatively evaluated for the emission of reactive sulfur gases, including the malodorous and toxic hydrogen sulfide.

When the Chinese drywall problem first emerged, I was one of three founding members of the ASTM Workgroup devoted to the matter. Among other things, the Workgroup issued a home testing protocol, but then, the focus shifted to developing a means to test newly produced drywall, to ensure that it was not an emitter of sulfur gases. After considerable debate, the Workgroup did indeed endorse a test method, which eventually became part of the Drywall Safety Act of 2012.

Notably, the text of the Drywall Safety Act refers only to “Sulfur Content,” leaving it to the CPSC to promulgate a final rule. And, so they did. Here’s where it gets interesting.

CPSC consulted with our ASTM Workgroup as to what testing methodology should be employed. For reasons known only to the ASTM hierarchy, despite its clear knowledge that chamber testing was the gold standard, it endorsed a marker, not a direct test method. A direct test method actually tests the board for sulfur gas emissions, and that can only be accomplished by enclosing a sample in a chamber, and then testing the enclosed air for the target analytes.

In general, testing for a “marker” is easier, but the marker must be rigorously proven to mirror the results of a true and proper analytical method. The marker chosen was orthorhombic cyclooctasulfur (elemental sulfur as S8). [Eagle-eyed readers who check the link above to CPSC’s Drywall Business Guidance will notice that “cyclooctasulfur” is currently misspelled on their document.] However, the only published data comparing the LBNL chamber testing with S8 testing did not prove out the S8 method. As I put it in my summary to the ASTM Workgroup:

“All that S8 tells you is that [the sulfur gas emissions are] “elevated” in the worst offending boards, but even then, it (the relationship between S8 and emissions) is not linear. Moreover, it tells you nothing about medium emitting boards.” And, if that weren’t bad enough, a notorious offending board—Shandong Chenxiang GBM Co., Ltd. aka C&K Gypsum Board (2006 origin)—would have passed the S8 standard, pegged at less than 10 parts-per-million.

ASTM, which publishes hundreds of consensus standards, seemed to forget even basic analytical principles when confronted with Chinese drywall. As a result, a number of members unsuccessfully challenged the standard, and subsequently left the Workgroup. Some even quit ASTM completely.

Fast forward to the present. I have been working with Michael Foreman, a construction consultant in Florida, and former member of the Workgroup, who has been heavily involved in the Chinese drywall matter. Foreman has been retained by a client in the process of purchasing a property with suspect drywall. Ironically, Foreman thinks it may be the above mentioned C&K. As you can imagine, the banks are wary to finance such purchases, without a drywall clean bill of health. But what constitutes a “clean bill of health”?

Remember, C&K board passed the S8 test, but is proven to emit sulfur gases. Yet, the seller is championing such testing since it is endorsed by the CPSC. Let’s clarify this. S8 is only indicated to certify new board, and CPSC is silent on the testing of installed board.

Fortunately, Foreman and I proposed a simplified (but still valid) chamber test that will measure actual emissions using hole-saw samples from the home, and found a top-notch lab to do the analytical work—at a fair price. We think there will be many calls for such testing.