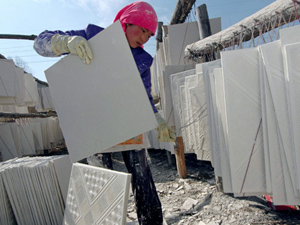 Even though it is still a vastly under-reported story, many people are aware of the problems being seen in recently constructed homes, caused by tainted or corrosive drywall—most of which came from China. Since Florida saw a building boom following the active hurricane seasons of 2004 and 2005, much of the attention on Chinese drywall has focused on the Sunshine State. Based on records of where Chinese drywall was destined, many other states will be affected.

By mid-2008, both state and federal government agencies were fielding complaints, generally related to sulfur odors emanating from the drywall, as well as a variety of corrosive damage observed, which was later linked to sulfide gases. The Consumer Product Safety Commission (CPSC) is now the lead federal agency on this matter, and has produced a series of comprehensive reports. These reports provide great detail as to the concentration of substances in the ambient air of affected versus non-affected homes, as well as an analysis of the chemical properties of domestic versus Chinese drywall.

Without a doubt, CPSC’s studies represent the best science that has been done to date on this problem, and their activities are ongoing.

Health effects reported by affected residents include skin and eye irritation, respiratory issues of all sorts, and recurrent headaches. Many residents add that the symptoms will decrease or disappear completely when they are away from home, but return upon reentry.

That a problem exists and is huge—possibly affecting more than 100,000 homes—is beyond dispute. However, identifying a problem is one thing. Solving it is something else entirely. Moreover, even identifying that a house has the problem is not without controversy, which brings us to the junk science.

ASTM International, a standards organization, is working on an inspection protocol for corrosive drywall. The use of the terms “tainted” or “corrosive,” rather than “Chinese” is encouraged since not all drywall from China is corrosive, and not all corrosive drywall comes from China. Homes have been identified in which drywall, supposedly of US or Canadian origin, has exhibited the typical “Chinese” symptoms.

Bear in mind that there are also reports of counterfeit “American” product originating from China. A further complicating factor is that the greatly reduced amount of outside air ventilation, typical of new homes trying to meet lamentable and poorly conceived energy conservation guidelines, will artificially concentrate corrosive chemicals, that in earlier times would have leaked out of the house.

Make no mistake that touting energy conservation as the holy grail is the first phase of junk science to impact this situation. Inasmuch as there may well be additive health and corrosive effects between drywall related chemicals such as hydrogen sulfide, and pollutant chemicals from other sources such as formaldehyde, the folly of overly tight structures cannot be overemphasized.

More junk science occurs when unscrupulous inspectors bring sophisticated instruments into the mix. It was noted some months ago by CPSC that certain drywall from China contains a higher amount of strontium than domestically produced board. Thus, the amount of strontium would be a marker for “Chinese drywall.” While this might be narrowly true, determining country of origin does not define whether or not the board is corrosive, and that is the goal of a home inspection.

Yet, some inspectors are promoting the use of X-Ray Fluorescence Spectroscopy (XRF), a method that can determine the strontium content of drywall in the field, as a definitive test for corrosive board, which it is not. Since XRF equipment is extremely expensive, and would appear to the uninitiated to be a more advanced method than actually looking for corrosion and ruling out confounding factors, a number of homeowners have been fooled.

Some attorneys have argued that country of origin might be of interest in future litigation, but the prospects of significant recovery are so minuscule, and the calculation of how much tainted product in a given home is so onerous, that the affected homeowner ought not to be concerned about country of origin at this time. (Junk legal science?)

Fourier transform infrared (FTIR) spectroscopy can be used to determine the sulfide content of drywall samples in the laboratory, and spectra have been identified that can distinguish corrosive from non-corrosive board. While this is not junk science, it is probably overkill in that a corrosive drywall finding would already have been made by visual inspection, and this is generally a non-destructive method. If FTIR were to be deployed as an alternative to visual inspection, a large number of walls might have to be damaged to obtain sufficient samples.

Qualitative results for board samples can be performed by incubating copper components in sealed containers with the suspect drywall. Tainted board would soon cause corrosion of the copper parts.

One more junk science element is the use of so-called Chinese drywall sniffing dogs. Homeowners are aware that our canine friends have a far better sense of smell than do humans, and at first blush this method seems reasonable. But, consider that nearly all people can smell the sulfide compounds at exceedingly low concentrations (as low as 0.5 parts-per-billion), and odor is almost always the first symptom noted.

Even if the dog could detect odor at a lower level, supposedly indicative of a problem to come, there are many other possible sources of sulfide gas odor in a home, including sewer gas and contaminated irrigation water. These confounding factors would have to be ruled out, and would be ruled out in a proper home visual inspection.

A final element of junk science might be classified as “junk political science.” Most observers admit—at least privately—that the only way the tainted drywall problem can be solved is with a federal bailout. After all, everybody is a victim. The distributors, contractors, and home builders did not know about tainted drywall when the affected homes were constructed, and the symptoms can take over a year to appear, after occupancy.

As popular as a bailout might be in affected states, the national public reaction to more bailouts right now is far from friendly. Thus, the politics are all about delay and giving people false hopes of recovery from dubious litigation.