Clutter, Hoarding, And Getting Organized

Clutter, Hoarding, And Getting Organized 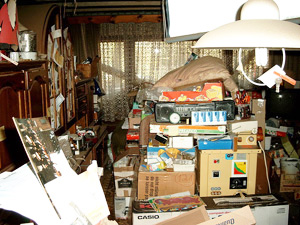 Pathological hoarding—a psychological condition recently popularized via a number of reality TV series—is the excessive collection of items, along with the inability to discard them. Notably, this affliction is said to affect up to 40% of people with obsessive compulsive disorder (OCD). Inasmuch as the stereotypical “neat freak” is often viewed as suffering from OCD, this finding seems paradoxical; but humans being human, disorders are quite individualized.

In extreme cases, hoarders’ homes can be so filled that only narrow pathways are available, leading to all sorts of safety and hygiene hazards, especially if the sufferer collects dozens of pets, as well. To make matters worse, most hoarders don’t believe they have a problem, presenting significant obstacles to treatment.

Affected individuals, not surprisingly, cannot decide which items are valuable and which are not. Exacerbating this are memory issues whereby they need to keep (or try to keep) everything in sight, so that they will not lose track of items. Anxiety will often occur whenever they have to make a decision about discarding stuff. Likewise, it can occur when an individual covets some item, and cannot rest until it is obtained.

To avoid this anxiety, a sufferer merely avoids making any decisions regarding discarding items, and will have contradictory emotions (act immediately or postpone) regarding acquiring new stuff.

People with hoarding problems will often think of all kinds of ways that they could use something, or they think of people that might want that object, so they keep it. The irony, however, is that in most cases, they never actually use the object in the way they thought of. They don’t actually give the object to the person they thought of. So these reasons for keeping things don’t turn out to be good reasons after all.

We have things that remind us of people we love, or they remind us of happy times. But for people with hoarding problems, the attachment to objects becomes very intense—sometimes more intense than the attachment to actual people. And instead of feeling attached to one thing, like a scrapbook or a favorite sweater, they can become attached to hundreds, even thousands, of things. Some people have told me that all of the things in their homes feel like their friends or family members, so they can’t bear to throw them out.

What’s the difference between living in a cluttered house and being a hoarder? Ultimately, I suppose, the hoarder will find it difficult or impossible to remove items to clean up the mess, until such point that it might become life-threatening. But, there are also hoarders who are extremely neat, and given enough space, could easily hide their compulsion.

Doctors Alberto Pertusa and David Mataix-Cols of King’s College London have published a “Structured Interview for Hoarding Disorder,” in which six criteria are identified. All six of these have to be met for a diagnosis of hoarding disorder…

So much for the pathological side of things. What if you just want to get organized?

I recently spoke with Carmen Coker, professional organizer and productivity expert. Carmen has taken her background in military intelligence, and has applied it to helping people get organized. Her websites provide many useful tips.

Understandably reticent on the details of what she did while in the service, she moved around a lot, and each move provided a different type of job with different responsibilities. As she says, “For me, it was a lifestyle and career that required me to stay extra organized. After studying organizing, I found that I enjoyed it enough to make it my business.”

Based in Cambridge, England, Carmen has perfected the art of virtual organizing, enabling her to lend her services to clients around the world.

Mental clutter is also a big problem. Carmen tells us that “There are between 60,000 and 80,000 thoughts per day running through your brain. Consider limiting the amount of time you spend consuming media in all its forms, and try to ensure that for the most part it is creating healthy and positive thoughts. I do feel that positive attitudes are going to bring positive changes to you.”

More than that, removing clutter will remove stress, and who couldn’t benefit from a little stress reduction?