Could You Be A Nosewitness To A Crime? 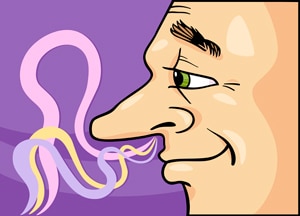 Could You Be A Nosewitness To A Crime?

Olfaction: The primordial sense of smell. While we humans have evolved to rely mostly on vision—and hearing to a lesser extent—we also notice that certain smells conjure up emotional memories, often better than pure visual images of the moment in question.

The olfactory bulb, which starts inside the nose and runs along the bottom of the brain, has direct connections to the amygdala and hippocampus. The amygdala is the brain’s integrative center for emotions, emotional behavior, and motivation. The hippocampus is primarily associated with memory and spatial navigation. Visual, auditory, and tactile information do not pass through these brain areas, and that might explain why “smells ring bells” as well as they do. Such memories are usually pleasant, but not always.

In 2003, an article appeared in the Journal of Clinical Psychiatry, entitled “Olfaction as a Traumatic Reminder in Posttraumatic Stress Disorder: Case Reports and Review.” The authors presented three cases linking olfaction to PTSD, as what they call a “precipitant,” or as “an important component of re-experiencing.” One poignant example referred back to an experience in Vietnam, whereby feelings of guilt, helplessness, and nausea appeared whenever the subject smelled diesel fuel.

The Vietnam experience involved a terrible automotive accident, in which he was unable to rescue his fellow soldiers. The vision also included the vehicle engulfed in flames, and doors swung open. The subject forevermore did all he could to avoid the smell of diesel fuel.

Which brings us to the matter of the use of human scent in criminal investigations, and expanding this beyond the familiar canine methodology. As noted in an FBI forensic science document…

“Using scent-discriminating dogs in criminal investigations should be limited to establishing a scent relationship between people and crime scene evidence. Because human scent is easily transferred from one person or object to another, it should not be used as primary evidence. However, when used in corroboration with other evidence, it has become a proven tool that can establish a connection to the crime.”

This is sound advice, of course, as all forensic evidence—including DNA—is rarely definitive in itself. Amazingly, though, this advice was ignored—notoriously so—in cases involving Keith Pikett, a Fort Bend County (TX) deputy sheriff and scent dog handler. Among other things, Pikett’s dogs moved from traditional tracking to the dicey area of scent lineups. Despite a series of conviction reversals involving his evidence, prosecutors kept using Pikett, until it all fell apart for him in 2009. Authorities are unable to discern how many innocent people may have been convicted based on Pikett’s evidence.

Notably, Pikett and the prosecutors who used him in such a haphazard manner were strongly condemned by all aspects of the law enforcement community.

As to the matter of human nosewitnesses, we refer to an article recently published in Frontiers in Psychology, entitled “Nosewitness Identification: Effects of Lineup Size and Retention Interval.” As co-author Mats J. Olsson explains: “Police often use human eye-witnesses, and even ear-witnesses, in lineups but, to date, there have not been any human nose-witnesses. We wanted to see if humans can identify criminals by their body odor.”

The paper states (and cites supporting references) that: “Each individual has a unique ‘odor print’ that is genetically determined, and that stays fairly stable over time, although other factors like diet, health and aging may modify that specific odor to some degree.”

The work consisted of two experiments. In Experiment 1, participants watched videos of violent crimes, which were accompanied by a body odor said to belong to the perpetrator. In a subsequent scent lineup with five different odors (including that of the perp), correct identification was significantly better than chance alone would have predicted. Experiment 2 examined the retention time of those scent memories, as would be tested in a scent lineup, discovering that after 1 week, performance deteriorated to little better than chance.

Oddly, but fully in keeping with our human nature, a known scent can trigger memories forever, but the ability to distinguish that scent from another closely-related odor is short-lived.