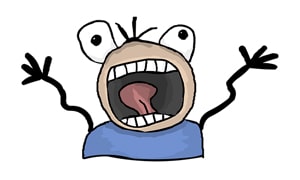 Now there’s a catchy title for you! I can’t take credit for this term, possibly coined by former NY Times reporter Alex Berenson, and we’ll get into the heart of the matter in a moment. But first, it’s long past time to remind people just how ubiquitous viruses really are.

An oft-repeated figure suggests that there are 1031 virus particles on Earth, and that at least one of them infects every living cell on the planet. Need more? Considering that the size of a virus ranges from 20 – 300 nanometers, if you could lay them end-to-end, the column would extend almost 200 light years into space. And, speaking of space, there are over ten million times more viruses on Earth than there are stars in the entire universe.

Before you freak out too much about how many people are testing positive for SARS-CoV-2), note that Human Herpesvirus 6 is found in almost 100% of humans, and is associated with many diseases far more serious than COVID-19. HHV-6’s little brother HHV-4 (aka Epstein-Barr) is “only” present in 90-95% of us, and while well-known as the cause of infectious mononucleosis, it is also associated with certain cancers and chronic fatigue syndrome. And, Herpesviruses come with a bonus. Once you’re infected, the virus remains in your body forever.

Varicella-zoster virus, commonly known as the cause of chickenpox, hangs around and can manifest later in life as the very nasty disease of shingles.

Still, it is important to realize that the vast majority of viruses do not cause disease in humans. Typically, when a virus jumps to humans from another species, there can be problems, as our immune systems must now confront this new invader, and will sometimes overreact–this overreaction causing disease. A virus will self-defeat if too many hosts die. Usually, new viral outbreaks tend to become less harmful with time; and potential hosts develop better immunity.

Then, there’s this one relating correspondence from J.B. Neiman, a managing partner and general counsel of Texas-based Complete Care, a company that owns 13 free-standing clinics, who got in touch because he “wants people to hear his story as opposed to the mainstream media.” Among Neiman’s points:

2.     Very different patient (in terms of age) than we’ve seen before June. Most of these patients would not have met criteria that we previously had (and all the health facilities had) for COVID testing. Now with more testing kits we are able to test a broader group of patients.

3.     Clinically, we’ve had very few hospital transfers because of COVID. Vast majority of the patients are better within 2-3 days of the visit and most would be described as having a cold (a mild one at that) or the symptoms related to allergies.

4.     In terms of what is driving them to the ER–Roughly half have been told by their employers to get a test. They have a sneeze or a cough and their employer tells them to go get tested. The other half just want to know.

5.     Heard several stories of how discharge planners are being pressured to put COVID as primary diagnosis– as that pays significantly better.

6.     Overall, based on what we are seeing at our facilities, the above information is really a positive story. You have more people testing positive with really minimal symptoms. This means that the fatality rate is less than commonly reported.

Tell me if you’ve heard this one before: The mainstream media is biased. Berenson’s Twitter feed, along with many others will try to give you the non-panicky side of the story.

Sure, we all know that “If it bleeds, it leads.” These days, though, we have the added component of breathtaking political bias. Before the Internet, alternative print sources were available, but relatively unknown. Now, it is possible to discover every point of view in seconds. And, if you think something is missing, switch to a different search engine.