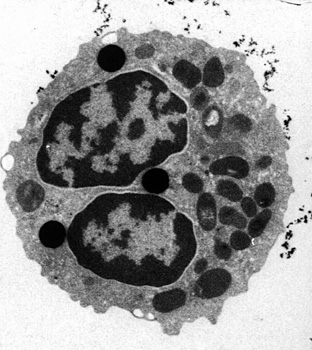 About five years ago, Zheng Cui, MD PhD, Associate Professor of Pathology at Wake Forest University School of Medicine, demonstrated that some sort of innate immunity to cancer in mice could be transferred to other individuals. White blood cells from cancer-resistant mice were transfused into mice with advanced malignancies, and 100 percent of them were cured.

Subsequent to that work, Cui’s group noted similar cancer-killing properties in the white blood cells of certain humans, based on in vitro studies. Specifically, the team looked at human cervical, prostate, and breast cancer cells. They found that the anti-tumor response is located in the granulocytes—a type of white blood cell that includes neutrophils, eosinophils, and basophils—known to fight bacterial infections.

Now, Cui’s group has been cleared by the FDA to start human trials. Cui calls the treatment Leukocyte Infusion Therapy, given the acronym LIFT.

“In mice, we’ve been able to eradicate even highly aggressive forms of malignancy with extremely large tumors,” Cui said. “Hopefully, we will see the same results in humans. Our laboratory studies indicate that this cancer-fighting ability is even stronger in healthy humans.”

A process called granulocyte apheresis will be used to collect the cells from pre-screened donors. This method takes only the granulocytes from the blood drawn, while the rest is returned to the donor. On the recipient side, using only granulocytes greatly lowers the possibility of Transfusion-associated Graft-versus-host disease (GVHD), a potentially dangerous side effect.

Cui points out that in most cases GVHD is mild, and that it is certainly preferable to malignancy!

The researchers will be recruiting 500 potential donors for blood screening. Of these, 100 volunteers with high cancer-killing activity will be asked to donate white blood cells for the study. The recipients will include 22 cancer patients with solid tumors that either didn’t respond originally, or no longer respond, to conventional therapies.

The overall goal of this phase of the project is to determine whether patients can tolerate a sufficient amount of transfused granulocytes for the treatment. Patients will be monitored regularly, and efficacy of treatment will be determined after three months. Pending good results, the next phase will examine if this treatment is better suited to specific types of cancers.

“If the study is effective, it would be another arrow in the quiver of treatments aimed at cancer,” said Mark Willingham, M.D., a co-researcher and professor of pathology. “It is based on ten years of work since the cancer-resistant mouse was first discovered.”

In an interview with Popular Mechanics magazine, Cui acknowledges that his approach is not exactly mainstream…

We skip over all the incremental steps—what is a gene, what is a mechanism—but in medicine you don’t really need that to develop a therapy. A physician will tell you it’s wrong, but the important thing for us is that it works. As long as it works, we don’t really care about how it works. Ninety percent of medical progress is made by the empirical approach rather than rational design.

Rational design is, basically, when a human comes up with an idea about how nature should work and then proves that the idea is correct, before you actually develop something. But in empirical approach, you simply make observations and learn from nature: what happens, how you can take advantage, and then simply copy that. That is what we have done.

You’d think that based on the exciting results, Cui would have no trouble getting funding, but you would be wrong. As Cui implies in the interview, the people controlling the purse strings of medical research tend to prefer the rational design approach. As it is, the clinical trial patients will have to pay their own way, although this will be covered in many cases by insurance.

It has been observed for centuries that some people have enhanced immunity to various diseases. After all, the Black Plague did not kill everyone in Europe, and cancer strikes a far smaller percentage of the population than did the Plague. Many have suggested that cultivating natural immune factors from particular individuals could prevent or cure many of the diseases that afflict us.

Perhaps Cui is on the right track.