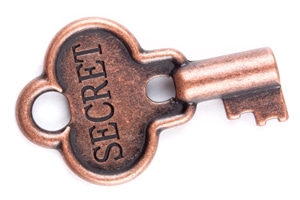 The TV series Dark Secrets, from 3net Studios, begins each episode with a teaser prologue, followed by this ominous voiceover:

“When an abandoned industrial building is cleared for demolition, a locked door is discovered in its basement. The door conceals an archive of strange and disturbing specimens, recordings, photos, and documentary films—compelling evidence of monstrous creatures and preternatural events. The documentarian’s whereabouts remain unknown. In his records, he identifies himself only as ‘The Teller.’ His investigations reveal a frightening world of dark secrets.”

The series deals in strange, supernatural phenomena, presented in a classic documentary style. Eyewitnesses or survivors are interviewed, and various forms of evidence are proffered. Often, the Government is accused of a vast cover-up, and people connected with the cases are threatened or paid off, and forced into silence. It all seems credible enough.

The music and editing—as well as the brisk 30-minute running time—add to the suspense, and the overall experience is quite enjoyable, until you start noticing problems with the narrative: Those interviewed are frequently the wrong age; names of media outlets are dubious; and newspaper clippings are too generic, as are the settings of some of the interviews. More than that, if “The Teller” is unknown, exactly who now controls these materials, who finances him, and what is his purpose in revealing all of this?

Thus, you soon discover that Dark Secrets is really a science fiction program, presented in documentary format—a mockumentary, if you will. Too bad that much of today’s “true” science is little more than a mock version, or even a parody of what it should be. Consider the comically overrated practice of peer review.

The theory is that an unbiased, impartial editorial review board, comprised of experts within the field, will carefully evaluate all studies submitted for publication. Whether or not this situation ever genuinely existed is debatable, but the fidelity to such a notion peaked at least 30 years ago. For one thing, scientific knowledge has expanded and specialized to the point that it is likely that the number of qualified reviewers, intimately familiar with the technical details of any particular field of endeavor—sufficient to properly evaluate it—is probably in the single digits. They may not even be on that review board.

Bear in mind that most scientific articles contain dozens of references, each cited to establish a key point. Yet, these referenced articles themselves also contain dozens of references, creating a nearly impenetrable maze of supposed documentation. No reviewer could possibly check all the sources. That’s why improper citations are far from rare. In some cases, the errors are trivial, but in others, the references are flagrantly misquoted or misinterpreted.

Add to the mix the disappearance of old-fashioned academic tenure, such that even full professors must earn their keep, so competition for grants is intense. This fosters an eerie conformity, and the nonsensical proposition that scientific truth is based on consensus. Of course, the peer review process can also be faked.

On July 10, the Washington Post reported that the Journal of Vibration and Control  had retracted 60 papers after discovering a “peer review ring” that had rigged the vetting process designed to insure the value and integrity of published research. Notably, fanboys of peer review were quick to remind us that the journal in question is “obscure,” conveniently ignoring numerous other vetting scandals at much larger publications, including Science and Nature.

After all, according to Richard Smith—Chief Executive, UnitedHealth Europe—peer review “…is at the heart of the processes of not just medical journals but of all of science. It is the method by which grants are allocated, papers published, academics promoted, and Nobel prizes won. When something is peer reviewed it is in some sense blessed.” In his article, which appeared in the Journal of the Royal Society of Medicine in 2006, he details its flaws, but contends that it is the best thing we currently have.

I respectfully disagree. Never mind that there are scores of websites devoted to exposing all manner of junk science, published under the rubrics of peer review, to the tune of billions of dollars. Never mind that former British Medical Journal editor Smith’s article itself contains a puerile spelling error (“pouring over” instead of poring over). The sole process whereby validity of a scientific study can be demonstrated, is for it to be duplicated by others.

At its very best, peer review can only establish that the study conforms to contemporary standards. Scientific validity is another matter altogether. Is this a true life dark secret?