Devaluing Physicians And The Consequences 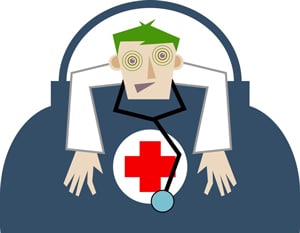 Devaluing Physicians And The Consequences

It is not easy to pinpoint when a trend begins in society, but in this case, we can do the forensics. Those of a certain age will remember when medical insurance—as it was then called—was truly insurance, in the classical sense. That is, “coverage by contract whereby one party undertakes to indemnify or guarantee another against loss by a specified contingency or peril.”

Back in the day, such losses, contingencies, and perils referred to catastrophic, or at least extraordinary costs, such as hospitalization. In fact, sometimes, the coverage was called “hospital insurance.” While there were managed care plans—such as Kaiser Permanente and Ross-Loos—that included many other services, at that time, they were usually not referred to as “insurance,” but rather as “health plans.” Today we would refer to such groups as Health Maintenance Organizations (HMOs).

In general, the medical establishment, especially in the wake of Medicare—introduced in 1965—saw managed care as a threat. Indeed, those who worried that the regulatory aspects of Medicare would come to apply to private medicine and insurance have been proven all too prescient.

A “supplier” means “a physician or other practitioner, or an entity other than a provider, that furnishes health care services under Medicare.”

Somehow, “provider” also came to mean the medical practitioner in certain contexts. Thus, a physician became a much more generic sounding “provider.” Ironically, many of the same voices decrying the ruination of medicine via Medicare and HMOs adopted the terminology of the enemy when they launched Preferred Provider Organizations (PPOs) in the 1970s. PPOs offer features of traditional fee-for-service insurance plans, such as the ability of patients to choose their own health care providers, but also follows the lower-cost strategies of HMOs.

For reasons of cost savings, and being able to free up physicians for the all-important work of charting (that’s how you get paid!), so-called mid-level providers such as physician assistants have proliferated. However, in a delicious double irony, many of these mid-levels are objecting to the term “mid-level provider.”

Given the projected shortage of primary care and other physicians, there certainly are tasks within healthcare that can be performed very nicely by individuals who do not hold a medical degree. Only don’t get into the middle of a discussion between a new nurse anesthetist and a seasoned medical anesthesiologist.

Atlanta-based otolaryngologist Elaina George, MD has a few choice thoughts on the matter:

“There has been a concerted effort to devalue the doctor. Medical education has shifted to a doctor being part of the healthcare team which uses central guidelines and population based Evidence-Based medicine instead of clinical judgment based on individualized patient care. Instead of having the power to make clinical decisions and lead the planning of patient care, the doctor has been relegated to the administrative task of signing off on clinical notes and writing prescriptions. One only needs to look at the electronic medical record to figure out how removed doctors have become from front-line patient care.”

The problem with such evidence-based medicine is that it can only report overall findings in large studies, which may be of little value to a particular patient. One excellent example is the case of skinny type 2 diabetics. The conventional wisdom fails miserably here. Clearly, they need not lose weight, and many such patients show disappointing results with carb-cutting. Moreover, I’ve been told by affected individuals that Metformin has less than dramatic results on these patients. Some published research disputes this.

Lest we forget, there is very limited literature on these patients. So what good does evidence-based medicine do them? Nay, it might even hurt them, if a provider tries therapies only proven in typical type 2s. Should the skinny type 2 be put on a draconian glycemic control regimen if the first line drugs don’t work? What about the side effects?

Perhaps the provider mentality and practicing by algorithm will save money. Although, even measuring net savings can be misleading, given high administrative costs, and the real possibility that people are forgoing care based on the expense.

No doubt, there are consequences when the government and third parties control healthcare. Just ask the parents of Alfie Evans.