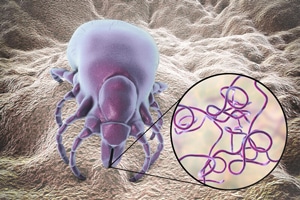 Lyme disease is a tick-borne bacterial infection, first identified in 1975, named for the region of Lyme/Old Lyme in Connecticut where it was first observed. In the early 1970s, several children and adults presented with a pattern of symptoms, including swollen knees, paralysis, skin rashes (erythema migrans), headaches, and severe chronic fatigue. Before its bacterial etiology was confirmed in 1981 by Willy Burgdorfer, it was thought to be some form of rheumatoid arthritis.

As such, the disease was originally identified by Allan Steere, Stephen Malawista, et al. as “Lyme Arthritis.” The primary infectious species involved is Borrelia burgdorferi, with B. mayonii in the upper Midwest, and B. afzelii and B. garinii in Europe and Asia.

While the disease has been seen in every part of the US, 95 percent of all cases are confined to these 14 states: Connecticut, Delaware, Maine, Maryland, Massachusetts, Minnesota, New Hampshire, New Jersey, New York, Pennsylvania, Rhode Island, Vermont, Virginia, and Wisconsin.

According to the CDC, Lyme disease is diagnosed based on symptoms, physical findings (e.g., rash), and the possibility of exposure to infected ticks. Notably, the rash does not always appear. Some authorities believe that the rash occurs in only 50 percent of cases. If that were not bad enough, there are limitations on the efficacy of current lab methods.

As with most diseases, early diagnosis facilitates treatment and cure. In the case of Lyme, with delayed diagnosis symptoms can worsen significantly and may include heart problems, such as an irregular heartbeat; eye inflammation; and hepatitis. While most authorities state that the disease cannot be passed from person to person, a controversial study from 2014 suggests that the disease can, in fact, be sexually transmitted. Bear in mind that some true cases of Lyme can go undiagnosed, with the patient receiving needless and costly therapy for other conditions.

Treatment usually consists of a round of antibiotics, based on various accepted protocols. Most patients will experience a full recovery. Those who do not may lapse into a stage in which fatigue and muscle aches can persist for more than six months. Such a condition has been called “Chronic Lyme Disease,” although the CDC prefers the term “Post-treatment Lyme Disease Syndrome” (PTLDS).

Unfortunately, this condition is poorly understood, and explanations range from an auto-immune etiology, to some other difficult to detect infection. As such, there is no proven treatment for PTLDS. Long-term antibiotic therapy has been shown to be ineffective, and in some cases can lead to serious complications. Ironically, some physicians who advocate this therapy call themselves “Lyme-literate doctors.”

Making matters worse, there are too many cases of PTLDS being misdiagnosed in patients with medically ambiguous symptoms. The CDC released a video entitled “Feeling worse after treatment? Maybe it’s not Lyme Disease.”

The article linked above relates four cases that ended up in serious complications or death, resulting from such misdiagnoses.

1.      A woman in her late 30s with fatigue and joint pain was prescribed multiple courses of oral antibiotics. This was escalated to months of intravenous antibiotics. She would die of septic shock related to a bloodstream infection. If you try to kill all the bugs, stronger ones will eventually take over.

2.      An adolescent girl who had years of muscle and joint pain, backaches, headaches, and lethargy, received a diagnosis of chronic fatigue syndrome. A second opinion yielded a diagnosis of chronic Lyme. She was subjected to eight months of antibiotics (oral and IV), which resulted in a critical catheter-associated bacterial infection. This infection was treated, and she was released.

3.      A woman in her late 40s received multiple insect bites and developed a flu-like illness with pain in her arms, legs, and back. She received a diagnosis of Lyme disease based on the standard laboratory test. This was upgraded to chronic Lyme, and she too subsequently developed a catheter-associated infection. This was properly treated, and her arthritis symptoms gradually lessened.

4.      A woman in her 60s with a low white blood cell count and degenerative arthritis received intravenous immunoglobulin, or antibodies, every three weeks for more than ten years. She developed a MRSA infection and an abscess that needed surgery to drain.

I’m guessing that in all these cases, the overkill infusions occurred at some sort of “alternative” treatment facility. Meanwhile, herbal protocols have been advanced for chronic Lyme, and people are claiming relief. As the CDC notes, “Patients with PTLDS usually get better over time, but it can take up to many months to feel completely well.” Perhaps, those who don’t improve have some other undiagnosed illness.

Sadly, the entire realm of Lyme Disease and PTLDS is fraught with uncertainties, and is complicated by conflation with other conditions, along with the actions of unscrupulous practitioners.