Don’t Be Afraid Of rbST

Don’t Be Afraid Of rbST 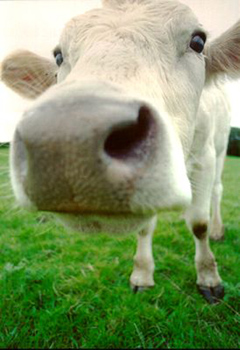 Just what is rbST, you might ask, and why do some people think that you should be afraid of it?

rbSt stands for Recombinant Bovine Somatotropin [trade name POSILAC®], a meta-natural version of the naturally occurring hormone bST (Bovine somatatrophin), present in the pituitary glands of all cattle. bST has always been present in cow’s milk at a concentration of about 10 parts-per-billion. Thus, ever since domesticated cattle were introduced perhaps 10,000 years ago, humans have been ingesting tiny amounts of this hormone. All animal-based foods contain trace amounts of hormones.

It has been known for some time that cows that tended to produce higher levels of bST also yielded more milk. Indeed, it was found in the 1930s that if a low milk-producing cow were to be injected with bST from another in the herd, its milk production would increase. The problem was that only very small amounts of the hormone could be extracted, and the process was quite expensive. But, that’s where “meta-natural” comes in…

What if we could isolate the gene responsible for the production of a desired end-product, for example bST or insulin, and engineer it into the DNA of a microorganism, and then have the little bug reproduce and replicate the molecule for us? After all, bacteria work cheap, needing only some nutrients and a warm place to live.

We could then isolate and sterilize the product. Note well that this product is not “synthetic” under the usual definition of that word. It is not man-made, since the exact same gene that would produce it is still producing it. The most you could say is that it is man-facilitated, but then that sort of description could be applied to nearly every activity performed by the human race. The substance is completely natural, and is absolutely indistinguishable from the same substance produced in the original animal.

That’s what recombinant technology is all about, and that’s why I refer to it as “meta-natural,” because we are going beyond what nature provides, by using good ol’ human ingenuity. When you think about it, agriculture itself is meta-natural. Otherwise, we would still be relying on hunting and gathering to obtain our food!

Human insulin produced by recombinant technology was introduced in 1982, and became an immediate boon to diabetics. 1987 saw the introduction of recombinant Human growth hormone, that has proven effective in treating growth disorders in children. By the way, this demonstrated conclusively that hormone activity is species specific. In the 1950s, attempts were made—that failed—to treat these same disorders with Bovine growth hormone.

In 1985, the U.S. Food & Drug Administration (FDA), upon exhaustive review, determined that meat and milk derived from cattle given rbST are safe for humans to consume. Specifically in reference to milk, the FDA stated that milk from a cow supplemented with rbST “is not different” from that of a non-supplemented cow.

Further scientific work, performed by the Congressional Office of Technology Assessment, the American Medical Association, the National Institutes of Health, the Department of Health and Human Services, the General Accounting Office, and numerous scientific and medical research institutions confirmed that rbST is harmless to both animals and the environment.

Check out the FDA’s report on rbST.

On the production side, with rbST, milk production will increase an average of 10 pounds of milk per supplemented cow per day. On the environmental side, since rbST can also be used to decrease the number of cows necessary to produce the same amount of milk, less manure is produced per gallon of milk produced.

Some will argue that since milk is already plentiful and cheap (tell THAT to a third-worlder), the technology is unnecessary. This fatuous notion is also related to the heavily-publicized but misunderstood contention that certain countries—including Canada and the European Union—have banned the use of rbST. Mark well that the scientific findings on rbST safety are not in dispute. Rather, these countries have banned rbST solely for political reasons.

In these countries, milk production is controlled by the government, and they are loath to allow technology and market forces interfere with their grand plans, schemes, subsidies, and meddling. Heck, some marginal operations might even have to close down.

Others have taken advantage of the hysteria by touting “hormone-free” milk—as if there even were such a thing—at greatly inflated prices. Much of this nonsense has been stopped by lawsuits, but the whispering campaign persists.

Finally, there are also those, including cancer doom-profiteer Dr. Samuel Epstein, who has made a living off scaring the public in matters such as this, even if his claims are regularly and widely disputed by mainstream science.

It’s time to get out of the Dark Ages. Rather than indulge in mindless fear, look at the facts. The use of rbST is not a cause for concern. Let science triumph over irrationality.