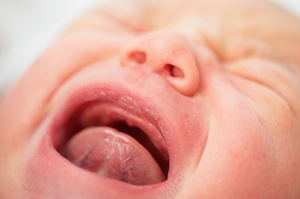 We can only imagine the trauma experienced by a baby, as it fights its way into the world beyond the womb. Struggling to take its first breath, it also must adjust from the darkness of the uterus to blinding artificial light—not to mention accommodating a significant drop in temperature, as well. Non-vocal in utero, the baby learns to cry upon birth.

Notwithstanding the obvious point that crying is virtually their only means of communication, the question of why babies cry–or why they cry so much—has been around as long as the human race. WikiEducator details more than two dozen reasons, but prolific Rhode Island based writer Danielle Buffardi breaks it out this way:

Craving attention and comfort—Yes, they like being held. The closeness is reminiscent of the womb. Danielle notes, “It’s important to remember that the more time you take to connect with your baby from the start, the more in tune you’ll be at meeting their needs and knowing what they require when their crying kicks in.”

No doubt, there’s something primal about a baby’s cry, and how adults react to it. Last year, Katie Young and Christine Parsons of Oxford University published a study in which magnetoencephalography was used to rapidly scan the brains of 28 subjects—none of whom had parental experience—while they listened to a variety of sounds including babies crying.

Unique to the baby cry, the researchers found an early burst of brain activity, followed by an intense reaction after about 100 milliseconds. Two areas of the brain were affected—the middle temporal gyrus (implicated in emotional processing and speech) and the orbitofrontal cortex (connected with reward and emotion processing).

Additional findings suggest that baby cries can also activate the fight-or-flight response, putting your body into a state of alert—whether or not you’re the caregiver. “When you hear a baby on a plane, you’re immediately alert, even if you don’t want to hear it,” said Parsons. “It’s a sound that’s very difficult to ignore.”

Ronald G. Barr, Professor of Pediatrics in the Faculty of Medicine at University of British Columbia, describes what he calls the Period of Purple Crying, a normal and predictable phase—which fortunately also has an endpoint:

The Period of PURPLE Crying begins at about 2 weeks of age and continues until about 3-4 months of age. There are other common characteristics of this phase, or period, which are better described by the acronym PURPLE. All babies go through this period. It is during this time that some babies can cry a lot and some far less, but they all go through it.

P=Peak of crying, generally during the second month
U=Unexpected. Crying can come and go for no apparent reason.
R=Resists soothing
P=Pain-like face. Even if they’re not in pain
L=Long-lasting. Can be five hours per day or more
E=Evening. Crying tends to occur more in the late afternoon or evening.

Pediatrician Harvey Karp bases his popular Happiest Baby on the Block book and video on the precept of “Mimic the womb and baby will swoon.” “A newborn baby is more like a fetus than an infant,” he says. “The brain could not mature enough [in the womb]; otherwise it would never get out. Their heads are as big as they can be before we have to evict them.”

According to Karp, there are five words, each beginning with “S” that are important in recreating the womb, and calming the baby: Swaddling, Side/Stomach position, Shushing, Swinging, and Sucking.

As to the shushing, Karp notes that “Shushing imitates the sound of the blood swishing through the arteries of the uterus. Don’t worry about being loud. The sound in the uterus is a couple of times louder than a vacuum cleaner, so that’s why when a baby is very upset, they say turn on a hair dryer or a vacuum cleaner.”

And here’s more good news about shushing. There’s an app for that! It’s called the Baby Shusher. The app includes timer and sound equalizer options, to give you precise control.

The Shusher is a revolutionary product that uses an ancient (but doctor-tested and approved) technique to help soothe a fussy baby, so everyone can get some much-needed sleep. The research and development behind the Shusher reflects our commitment to excellence, and this is supported by independent testimonials from customers around the world. We welcome feedback from people who already use the Shusher, as well as queries from expectant mothers and fathers.