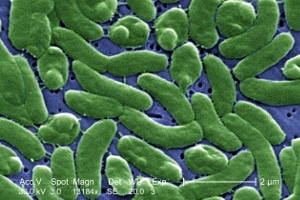 In the hit movie Jaws (1975), the fictional New England beach resort of Amity is terrorized by a vicious great white shark, aka Carcharodon carcharias. The solitary predator is finally dispatched when Sheriff Brody (Roy Scheider) takes deadly aim at a scuba tank lodged in the shark’s mouth. Bull’s–eye! His bullet hits the tank, it explodes, and along with it the shark.

Even though unprovoked white shark attacks on humans are rare, many people have a primordial fear of such encounters. No doubt, this fear is based largely on the success of the Jaws franchise, dozens of copycat features, and the endless array of white shark documentaries. A friend of mine noted back in the late 1970s, as cable TV began its big rollout in the US, its two mainstays were great white sharks and Hitler.

But what if a marine predator were not solitary, but present in the tens of millions? And, what if it were invisible yet every bit as deadly as C. carcharias? May I introduce you to Vibrio vulnificus, a Gram-negative, motile curved bacterium found in marine and estuarine environments. It thrives in seawater, sediments, plankton, and certain shellfish (oysters, clams, and crabs). The bug has been encountered in the Gulf of Mexico, the Atlantic Coast as far north as Cape Cod, and the entire U.S. West Coast.

Its distinguished family Vibrionaceae includes the more famous Vibrio cholerae, the agent of epidemic cholera. Recent events have propelled V. vulnificus into the news, and its notoriety might just surpass its better-known cousin.

On September 21, 2013, 59-year-old Henry “Butch” Konietzky, was setting crab traps in Florida’s Halifax River–a brackish semi-saltwater body more akin to a lagoon. Soon after, he noticed lesions on his legs, and went to the ER the next evening. He died the following day from an unstoppable V. vulnificus infection.

According to his sister-in-law Debbie Stack, the bacteria killed him in 28 hours. “It’s just horrifying, it’s just totally horrifying. They tried multiple antibiotics, but nothing was touching it–nothing even fazed it.” Upon Konietzky’s death, Florida health officials reported that to date in 2013, 26 cases of V. vulnificus have been logged in the state, causing nine deaths.

Annually, on a national basis, the CDC estimates as many as 95 cases of infection (half of which are culture confirmed), 85 hospitalizations, and 35 deaths. V. vulnificus is most often transmitted by eating raw or undercooked shellfish, particularly oysters harvested from warmer waters. This pathogen is the leading cause of death related to seafood consumption in the United States. Wound infections may occur when wounds or soft tissues are exposed to warm seawater. Notably, these wounds can be tiny, and in the Gulf region are often ant bites. V. vulnificus affects only humans and other primates.

It was determined that Konietzky’s illness resulted from a wound infection. Yet, the rapid progression of the infection and his quick death seem hard to explain–at least given the facts that have been made public. While all people are susceptible, those with underlying medical conditions, especially liver disease, may be at increased risk of infection and serious complications. Indeed, patients with chronic liver disease have a much higher risk of septicemia and death; approximately 80 percent of deaths occur in patients with liver disease.

In accordance with HIPAA, of course, such details were missing from any media accounts of the Konietzky matter. Thus, we can only speculate.

More than 100 strains of V. vulnificus have been identified, and a small number of these are especially virulent. Perhaps Konietzky ran into one of those bad strains. Possibly, he could have received a huge inoculation of the bug, based on stepping into a highly contaminated pool of water. Inasmuch as excessive amounts of antibiotics are utilized–notably in the beef industry–a worst-case scenario could involve the evolution of a Superbug-like mutated form of V. vulnificus, triggered by antibiotic run-off into the water.

The prospect of an antibiotic resistant strain of Vibrio vulnificus is scarier than any shark.