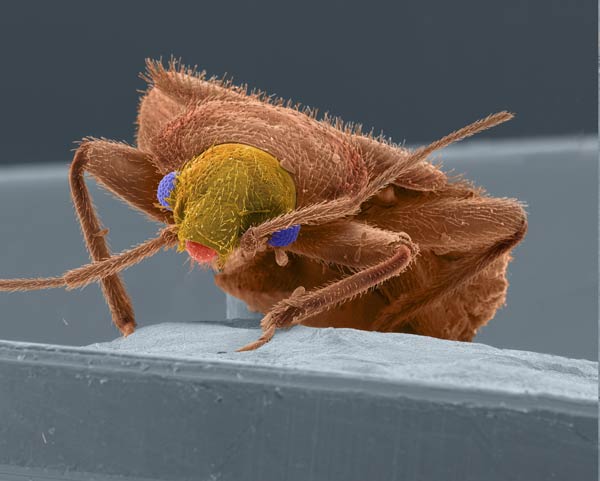 Another once defeated pest is making a huge comeback. Blame it on the banning of DDT, more international travel, sloppy hotel housekeeping, or a combination of these factors and more. The fact is, our old friend Cimex lectularius, and related species have returned to the scene—with a vengeance.

According to Clive Boase, director of the Pest Management Consultancy in Haverhill, England:

“The trend is very worrying. Since the mid-1990’s, numbers of reported infestations have almost doubled annually.”

And, there are legal implications. In the 2003 case of Matthias v. Accor, the plaintiff was awarded over $382,000 in a matter involving an untreated infestation in a downtown Chicago budget motel.

The Cimex species are wingless, small, (4-5 mm long when fully grown), speedy, and are dorsoventrally flattened, allowing them to hide just about anywhere. When you can see them, they are rust brown in color, and that deepens after they eat—and they only eat blood. They generally come out at night, and considering that they can go for months without feeding, they can surely bide their time.

One thing they can do every day is reproduce: A female lays 2-3 eggs per day after mating, and these eggs will hatch in about 10 days. Cimex will live for 6-12 months, and I invite you to do the math. Telltale signs of an infestation are blood spots on mattresses, and in bad cases, a sickly sweet smell, from all the togetherness of thousands of them in close quarters.

Most people discover they have a bedbug problem from skin reactions, caused by the pest’s saliva during its nice bloody meal. Large welts are often observed on the arms and shoulders, although this reaction can occur up to nine days after a bite. Some people have no reaction at all, while allergic individuals can have a terrible time with Cimex.

An infestation can be confirmed by the identification of specimens collected from the suspect facility. Collection of live or dead bedbugs, cast skins, hatched or unhatched eggs will determine an infestation. Your friendly pest control operator may first try spot-treating affected areas, but in a large infestation may actually have to fumigate the entire structure. DowAgro’s Vikane®, the termite fighter, has been used successfully in this application.

While bedbug stories have been cropping up all over the country. New York City seems to have has the most serious bedbug problem. Here are some reasons why…

1.    It has a huge number of international travelers.

3.    Public hygiene is on the downturn

4.    Elected officials have, until recently, spent very little money combating a problem they thought was relegated to the history books.

According to the Washington Post, NYC Councilwoman Gale Brewer wants to create a task force that would monitor this epidemic and develop policy solutions to curb the spread of these pests. She also plans to introduce new legislation that seeks to halt some common mattress industry practices that worsen this problem. The bill calls for a ban on reconditioning mattresses—the practice of taking old ones, refurbishing them and selling them like new. Not surprisingly, this can often spread the bugs into stores and homes.

Here’s a comforting thought. According to authorities at Michigan State University:

“There is a strong correlation between bedbugs found in the living area of a household and the presence of bats in the attic. Quite often a population of bedbugs, feeding on bats in the attic, migrate to the living area. If you have confirmed the identification of bedbugs in your household, check your attic for bats. If bats are eliminated, the source of your infestation will be eliminated.”

Talk about a double whammy!

The return of Cimex is one of those least preferred consequences of our ever-shrinking world, and I’m afraid it won’t be the last.