You Don’t Need The Food Police

You Don’t Need The Food Police 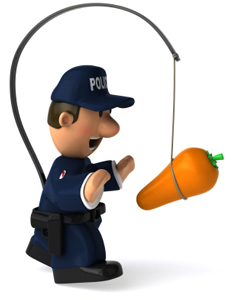 Although New York City Mayor Bloomberg’s notorious limit on the size of sugary drinks was struck down on March 11th, proponents of the Nanny State are not backing off. Far from it. On April 22nd, NYC announced a proposal to raise the legal age for buying cigarettes and other tobacco products from 18 to 21. Of course, both of these noxious ideas are introduced under the rubrics of protecting public health.

That they are also contrary to basic freedom seems to be lost on their proponents, including the now quite tiresome Mark Bittman, food journalist, author, and columnist for The New York Times. Of late, Bittman seems to have re-invented himself as a PC-scold…

Sugar-sweetened beverages don’t meet this description (of nutritious food) any more than do beer and tobacco and, for that matter, heroin, and they have more in common with these things than they do with carrots. They promote growth all right—in precisely the wrong way. They are not food.

We should be encouraging people to eat real food and discouraging the consumption of non-food. Pretending there’s no difference is siding with the merchants of death who would have us eat junk at the expense of food and spend half our lives earning enough money to deal with the health consequences.

Not surprisingly, Bittman proposes taxing all sorts of “unhealthy” foods, as do many others in what is now termed the Food Police. Perhaps Henry David Thoreau was the first to warn us—in Walden (1854)—about “[T]he self-styled reformers, the greatest bores of all.”

Within the United States, there is little doubt that the Food Police are led by a DC-based group that inaptly calls itself the Center for Science in the Public Interest (CSPI). Its army of critics note that in reality, it produces little science, and is not so often in the public interest, either. Many people identify the campaign against trans fats with CSPI, but few seem to recall that CSPI was instrumental for their introduction into the American diet in the first place!

This was a direct result of CSPI’s efforts against saturated frying fats, especially in fast-food restaurants, beginning in 1984. The program was expanded two years later to include tropical oils. And then, in 1987, they began to advocate in favor of trans fats, as the ideal replacements for those evil traditional cooking fats. They eventually had to retreat from this position, even if they didn’t exactly do it honestly.

As was detailed by PhD nutritionist Mary G. Enig:

On October 20, 1993, CSPI—an eager proponent of partially hydrogenated oils (trans fats) for many years, even when their adverse health effects were apparent—reversed its position after an onslaught of adverse medical reports linking trans fatty acids in these processed oils to coronary heart disease and cancer. Instead of accepting the blame, CSPI pleaded “not guilty,” claiming that the fault lay with the major fast-food chains, because they “falsely claim to use ‘100% vegetable oil’ when they actually use hydrogenated shortening.”

Actually, a fat or oil or mixture of fats and/or oils is called a “liquid shortening” when it is used in baking and frying; similarly, when poured over lettuce and tomatoes, it is called a “salad dressing.”

Note that CPSI has profited from both promoting and attacking trans fats. For this reason alone, anything CSPI ever says should be taken with a huge grain of salt (even if they would be against that, as well).

Paleoconservative writers speak of “anarcho-tyranny,” whereby the State fails to enforce many laws intended to protect the public, but does aggressively enforce other statutes that seem to exist only to oppress the law-abiding and innocent through exorbitant taxation, bureaucratic regulation, the invasion of privacy, and the engineering of social institutions.

My take is that most people would rather make their own choices about what they eat and drink. To be sure, there is plenty of good stuff out there. I was recently introduced to Wonderfully Raw Gourmet Delights LLC, based in Watsonville, CA. Founder Sequoia Cheney, whose life has always been devoted to serving others, had to figure out how to deal with her type 2 diabetes.

Her journey led her to the raw food movement, and inspired her to start the company. As she told me…

“Our products, including our popular line of Coco-Roons are a testament to the union between sound nutrition and excellent taste. We offer guilt-free indulgence, which is both vegan and affordable. Wonderfully Raw thus represents my gift to people of all interests—foodies and the public at large—who want a brand that reflects their values, interests, and responsible leadership. I encourage individuals to visit our site to learn more about products.”

How about that? A positive message, and no food police needed.