Don’t Tread on Me: Are the Attacks on Carpets Justified?

Don’t Tread on Me:  Are the Attacks on Carpets Justified? 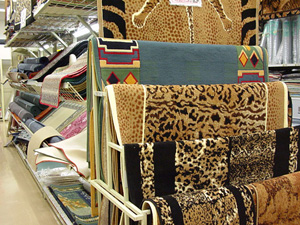 It’s easy enough to count up the many potential dangers in the average residence: Faulty wiring, leaky gas lines, rickety staircases, hidden structural damage, and hazardous chemicals accessible to small children. Now, some folks would like to add carpeting to this sinister list.

Opponents of this age-old floor covering allege that carpeting emits a cocktail of toxic gases, showing a direct relationship with various forms of cancer, respiratory illness, and intense allergies. These naysayers don’t seem to be bothered by the wealth of scientific data, including exhaustive studies by the Environmental Protection Agency (EPA), that contradict worries about how that old throw rug or wall-to-wall masterpiece in your home is really a ticking time bomb.

Often, misconceptions and fears about the effects of new carpet emissions—the emissions themselves are relatively minuscule—are the very reason some homeowners pay a lot more money for hardwood floors or tile. And yet, these seemingly attractive alternatives might themselves be worse emitters of various chemicals. Thankfully, the carpet industry takes these allegations seriously, and is doing something about them.

Since 1992, the Carpet and Rug Institute (CRI) has developed and administered the “Green Label” Indoor Air Quality testing and labeling program, first for carpet and then for adhesives and cushion materials. These programs identify low-emitting products, and require that submitted product samples meet scientifically established standards. And, as to carpet already installed, the Institute created the vacuum cleaner testing program, offering consumer guidance on the selection of these appliances.

It turns out that the very chemicals linked to carpet, most of which are either legally mandated or commonly accepted, exist in greater concentrations in the clothes we wear, the furniture we use, and in dozens of other products. Indeed, many people have allergic reactions to garments treated to be wrinkle and stain resistant. I advise washing these once or twice before wear, to remove residual chemicals.

Extensive scientific studies prove that new carpet is one of the lowest emitters of volatile organic compounds (VOCs) in the indoor environment. Bear in mind that all interior products in the home impact the air, and other items such as paint, wall coverings, and other floor coverings emit VOC levels up to ten times higher, and often linger in the environment much longer than those that originated from carpet. Besides, the minimal VOC emissions and non-hazardous odor from new carpet usually dissipate within the first 48 to 72 hours after installation, given reasonable ventilation.

Still, critics argue that new carpet, or old carpet for that matter, adversely affects the indoor environment. However, a study completed in 1994 by ENVIRON, an independent research company, assessing the risk of any emissions from carpet, states that:

“No cancer or toxicity health risks were identified that would be considered of public health concern.”

And, according to Dr. Alan Hedge of Cornell University,

“Concentrations of VOCs in carpet emissions are substantially lower than those known to produce effects,—a hundred, a thousand, ten thousand times lower than any known effects.”

If that sounds a little bit reminiscent of the oft-quoted adage “The dose makes the poison,” go to the head of the class!

Frequently overlooked in discussions of carpeting and health effects is the simple fact that carpet provides a benefit as a “trap” or “filter,” holding dust and dirt until it can be removed by routine vacuuming. The filter or holding attributes of carpet, compared to a smooth floor covering, can help keep dust particles from constantly circulating and thus becoming airborne in a room by foot traffic and air movement.

This can be an advantage in the never-ending battle between humans and dust mites. Note that in a typical household, dust mites have a small concentration in carpet (20%), as opposed to mattresses (60% or more). Which is to say, carpet is a relatively hostile environment for dust mites and the allergens they spread.

It should be mentioned that the most highly allergic individuals may be forced to remove all fabric-based floor coverings, and all fabric-covered furniture from their homes. Furthermore, scrupulous dust, particle, aerosol, and pathogen removal must also be initiated. To such individuals, carpeting would be only one of many assaults on their out-of-whack immune systems.

Certainly, prudence must also be exercised when a baby is put on the floor, carpeted or otherwise. Many mothers will place a clean blanket on the surface.

Regular home maintenance is the key to good indoor air quality—and carpet is no exception. A decent quality, well-functioning vacuum cleaner is typically all a homeowner needs to maintain a clean and environmentally safe carpet.