Driving While Distracted or Drowsy:   A Recipe For Disaster

Driving While Distracted or Drowsy:   A Recipe For Disaster 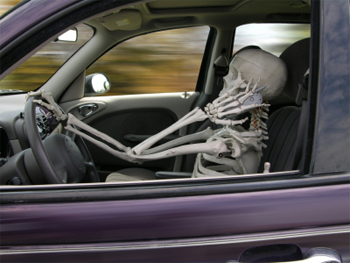 With the summer road trip season starting in earnest as we approach July 4th, as well as the recent introduction of Apple’s iPhone, it is prudent to revisit the subject of driving while distracted or drowsy. Indeed, as noted by The National Highway Traffic Safety Administration (NHTSA) in 2002:

While much focus has been placed in recent years on alcohol-related driving and speeding, less focus has been paid to other forms of potentially unsafe driving behaviors that draw drivers’ attention away from the primary task of driving such as distracted and drowsy driving.

Findings from a recent joint study undertaken by NHTSA and the Virginia Tech Transportation Institute include the astounding statistic that almost 80 percent of crashes and 65 percent of near-crashes happen within three seconds of some form of driver distraction.

In the study, the drivers of 100 vehicles equipped with video and sensor devices were tracked for over a year. Nearly 2 million miles were logged, yielding 42,300 hours of data. The 241 drivers of the vehicles were involved in 82 crashes, 761 near crashes, and 8,295 critical incidents.

In the words of then NHTSA acting administrator Jacqueline Glassman:

“This important research illustrates the potentially dire consequences that can occur while driving distracted or drowsy. It’s crucial that drivers always be alert when on the road.”

Not surprisingly, the study found that using cell phones is the most common distraction for drivers. Inasmuch as talking on a cell phone is less risky than dialing, it is still a factor in almost as many crashes because it is done far more often. The study did not comment on any advantages of hands-free over a held cell phone, but one can deduce that the primary problem is over-concentration on the call and under-concentration on the road—regardless of how the phone is employed.

Here are a few more findings:

Since we are emphasizing the distraction danger posed by cell phones, for the sake of completeness, let us consider another supposed health risk posed by the devices—brain cancer.

Some years ago, anecdotal reports of a cell phone/cancer connection flooded the news media. Fortunately, we now have three large case-control studies and one large cohort study on this matter. A case control study compares a group of individuals who have a medical conditions with a group of patients that do not. In a cohort study, patients who presently have a certain condition and/or receive a particular treatment are followed over time and compared with another group who are not affected by the condition under investigation.

The studies all agreed on these important findings:

If you have become a sober driver based on the massive publicity given alcohol-related traffic accidents, it’s time you also pay attention to the hazards associated with distracted and drowsy driving. Can you hear me now?