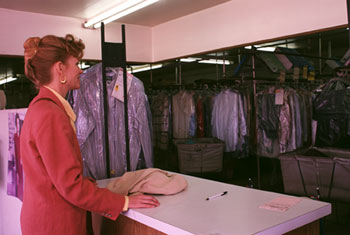 Many of us remember “The Jeffersons,” a long-running (1975-1985) TV series about an inspirational and successful Black family, that owned seven dry cleaning stores. These days, though, some would regard this sort of enterprise as a potential health hazard—owing to the chemicals used to eliminate the unsightly stains that the dry cleaning process handles so well.

So, let’s take an objective look at the situation, focusing on perchloroethylene, popularly known as “perc,” the primary solvent of dry cleaning.

Dry cleaning, of course, is not a “dry” process at all, other than in the same sense that dry ice (solid carbon dioxide) is “dry.” The meaning here is that little if any water is employed. Naturally, the garments must still be wetted with some solvent to remove stains. Perc became the solvent of choice since it is effective, is non-flammable, and does not damage the fabrics. As a bonus, perc can be recycled and reused, lowering the cost to the consumer. Another advantage of perc as a dry cleaning solvent is that it does not contribute to smog formation, ozone depletion, or the “greenhouse” warming effect.

It should be noted that before the introduction of perc in the 1930s, the long history of dry cleaning—that dates back to ancient times when fullers used harsh lye and bleaches—has seen the use of many nasty solvents including camphene, benzene, kerosene, and gasoline. As such, perc represents a wonderful improvement!

It is true that the EPA has classified perc as a “possible human carcinogen,” but this is by no means unique, or even especially definitive. Charged with protecting the public health, the Agency decided years ago to always err on the side of caution, and basically stipulated that any product that causes cancer when fed in large doses to rats and mice would automatically be termed a carcinogen. Additionally, EPAs policy is structured so that animal and human studies that show no evidence of cancer are not given the same weight of consideration.

However, subsequent testing produced contradictory results, including the finding that perc does not cause the genetic damage typical to other carcinogens. Moreover, epidemiological studies on many substances carcinogenic in rats and mice have shown that such results may not apply to humans at all. For example, the National Institute for Occupational Safety and Health (NIOSH), found no increase in any cancer (compared to the general population) among 600 dry cleaning establishments where workers were known to have been exposed to only perc and not other solvents.

It should be noted that rodents have also developed tumors from extremely potent carcinogens that occur naturally in many substances, including peanut butter, mushrooms, and coffee, if these carcinogens are extracted and administered directly to the animal at high doses.

The EPA itself concedes that:

“As with all health effects, the potential for an increased risk of cancer depends on several factors including how much perc there is, how often the exposure occurs, and how long it lasts.”

In fact, we are all exposed to perc because it is found in the air and drinking water nationwide. But the amounts are so insignificantly small that they are not hazardous to the average person’s health. The real risk with perc comes from facilities that do not properly maintain machines, patch equipment leaks, or adequately ventilate their workplaces.

Fortunately, modern dry cleaning equipment and cleaning practices reduce or eliminate employee exposures. Take, for instance, the use of “dry-to-dry” machines, which clean and dry garments in a single unit and eliminate the need to transfer solvent-laden garments from a washer to a dryer.

It seems that fear of perc should better be directed at poor maintenance procedures, shoddy business practices, and outright incompetence. And, it must be said, that overblown regulatory claims of “carcinogen” don’t exactly help to clarify the matter.