Electronic Health Records and Their Meaningful Use

Electronic Health Records and Their Meaningful Use 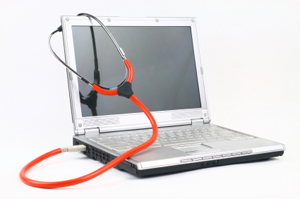 2012 is upon us, and—among other things—this means that we are one year closer to the 2014 deadline for “meaningful use” of electronic health records. The department of Health and Human Services has been heavily promoting and actively encouraging this transition. So far, the agency paid out more than $711 million in Medicaid EHR and more than $527 million in Medicare EHR incentives since the program began last January.

According to HHS, the rate of EHR adoption doubled between 2008 and 2011, from 17% to 34% among physicians. Of course, looked at another way, this means that two-thirds of physicians are not yet using EHR. In a somewhat tortured analogy, HHS secretary Sebelius likened this lack of EHR to the record-keeping technology used by Hippocrates. More on this later.

Many articles have been written on EHR software, so I thought it was time to look at the related hardware. A recent conversation with Shannon Lyman and Ken Woodruff of Lexmark provided some interesting insights.

While paperless records are the goal, hospitals and clinics still must be able to access critical forms and reports in the event of a network outage. In many facilities, established procedures require the printing of thousands of pages of backup records, which must then be shredded, in accordance with HIPAA mandates.

Ken described the situation at Gwinett Medical Center in Lawrenceville, GA. GMC printed 5,000 pages of backup reports twice daily, although they were rarely used. As bad as this sounds, consider that the information provided in this manner could also be as much as 12 hours old—far from ideal for critically ill patients.

Lexmark brought in its Downtime Reports Solution, which provides instant access to current patient information during systems outages. As data is being generated, it streams to the secure, encrypted internal hard drives of designated printers and multifunction printers. As long as electrical power is available, an authorized user can access the necessary patient records, and choose which reports must be printed.

Another aspect—perhaps the most challenging—of the move to EHR is implementation. Nearly all medical personnel I’ve spoken with relate a variety of horror stories, often tied in with incompatibility of various software programs; having to run manual and electronic systems in parallel; and operational inconsistencies within the same hospital.

On the printer side, considering the vast array of forms used in health care—from admissions and its ID wristbands, to the pharmacy and the ER and patient floors—the requirements are staggering. Indeed, at Genesis Health System, based in Davenport, IA, their registration system alone uses about 70 different forms, 20 of which are required for every patient’s registration packet.

Being able to handle the external data streams necessary to populate these forms, as well as allowing Genesis to migrate from its legacy system to the new printing system without disrupting operations proved to be a formidable challenge for would-be vendors. Lexmark’s purpose-designed successful solution involved laser printers, its Document Producer software for forms creation, and its Document Distributor for forms routing.

No doubt, companies like Lexmark are the future of health care administration.

But what about Hippocrates, and all those incentives to get EHR fully implemented? Hippocrates may not have had EHR, but he did have his priorities in order, I daresay more than our health care industry does these days. After all, the Feds are only too happy to pay out billions of dollars to incentivize electronic record-keeping, making their job easier, and no doubt creating thousands of non-clinical jobs in the process.

Meanwhile, reimbursement to the actual health care providers continues to drop, and medical students face hundreds of thousands of dollars in student loans, against a backdrop of far too few residency positions, in a system that is rapidly going broke.

I’m all for EHR, but I can’t stop thinking about polishing the brass on the Titanic.