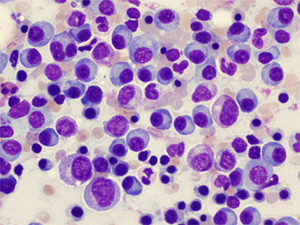 Multiple myeloma is a malignancy of plasma cells (a form of lymphocyte) that typically involves multiple sites within the bone marrow. Plasma cells are derived from B cells, produced in the bone marrow. When some sort of antigen appears, it binds to a B cell, whereby it becomes a plasma cell, and now produces antibodies to destroy the attacker.

Normally, the plasma cells will die off a few days later, but the malignant variety accumulates in the bone marrow, eventually overwhelming the production of healthy cells. Typically, less than five percent of bone marrow cells are plasma cells, but for multiple myeloma sufferers, the figure can rise to over ten percent.

Muliple myeloma is the second most prevalent type of blood cancer (second to leukemia), but it is not a common cancer. In 2004, it was predicted that 15,270 would be diagnosed with multiple myeloma in the US, with 11,070 expected to die of the disease.

As medical textbooks might put it, an intriguing feature of multiple myeloma is that the antibody-forming cells are malignant, and, therefore, may cause unusual manifestations.

One such unusual manifestation was recently discovered by a group of researchers led by Dharminder Chauhan and Ajita V. Singh, of the Dana-Farber Cancer Institute. Their study was published in the October, 2009 issue of Cancer Cell, and is entitled “Functional Interaction of Plasmacytoid Dendritic Cells with Multiple Myeloma Cells: A Therapeutic Target.”

Plasmacytoid Dendritic Cells (pDCs) are a type of immune system cell that patrols the body searching for various antigens. Once finding them, these cells convert them into smaller pieces and display the antigenic fragments on their cell surfaces. The dendritic cells then travel to lymph nodes or the spleen where they stimulate other cells of the immune system to make their own sorts of responses.

However, in the presence of myeloma, the pDCs turn traitor, and actually promote the growth and survival of these cancer cells, making them resistant to drug therapy, and weakening the overall immune response to boot. This seems to be a dangerous spin on the recently discovered property of dendritic cells in which they silence aggressive immune cells, and prevent them from attacking innocuous materials in the body, or even the body’s own tissues (immune tolerance).

“This is the first time that immune system cells have been found to be converted to another function,” says Chauhan. The mechanism for this change is yet unknown, but it is thought that proteins released when the pDCs bind to a myeloma cell activate a rogue set of genes within the pDCs.

The good news is that traitor pDCs can be reformed when exposed to compounds called CpG oligodeoxynucleotides. (CpG ODNs). As it happens, certain of these compounds are already in clinical trials for other forms of cancer, and the group involved in this study wants to start trials of CpG ODNs with myeloma patients in the near future.

According to this study’s senior author, Kenneth Anderson, MD, of Dana-Farber, “This is a potential approach to the treatment of myeloma that is refractory [non-responsive] to all current therapies, while increasing immune function and thereby decreasing infections in myeloma patients.”

Let’s hope that the potential here becomes reality—and soon—for all victims of this disease.