Fires That Occur During Surgery

Fires That Occur During Surgery 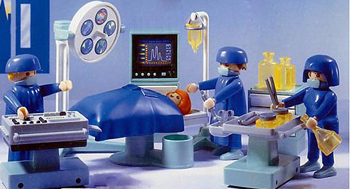 ECRI Institute, a nonprofit health research agency based in suburban Philadelphia, estimates that 50 to 100 fires occur during the more than 50 million surgeries performed in the United States each year. The fires are responsible for one to two fatalities annually, and 20 percent of patients affected suffer serious, disfiguring injuries. Most fires are caused when oxygen builds up under surgical drapes during the use of electric surgical tools that cut or remove tissue or control bleeding, the institute says.

While the number of surgery fires might be small, the consequences are serious enough that the American Society of Anesthesiologists plans to issue its first guidelines aimed at preventing them within a few months. Health officials aren’t required to report surgery fires, but the Society believes they’ve increased over the past two decades with the use of lasers and tools that use electric current.

Dr. Jan Ehrenwerth, professor at the Yale University School of Medicine, is a member of the Society’s task force on surgical fires. Speaking on behalf of the task force, he stated that:

“We think there is a lot of underreporting and a lot of near misses.”

According to ECRI’s Mark Bruley, too many anesthesiologists are using 100 percent oxygen instead of only what the patient needs. Not surprisingly, Ehrenwerth disagrees:

“We have to look at the patient and see what’s safe for the patient. We don’t want them to have decreased oxygen to their heart or their brain.”

“It’s a reactive chemical and exposed to heat with things to burn nearby…a fire can erupt. The patient is unconscious and can’t feel anything and can’t tell the staff.”

Proposed guidelines include lowering the concentration of oxygen given to patients during surgery by diluting it with room air when surgical tools that could ignite a fire are in use. Other suggestions are to reconfigure drapes to minimize oxygen buildup and use suction devices to remove excess oxygen from surgery sites.

Still, the ultimate responsibility lies in the operating room. As de Richemond said:

“Communication among the surgical team is critical to prevent surgical fires from occurring.”

Only recently has there been much media attention on this issue, due in large measure to the activities of Cathy Lake, founder of www.surgicalfire.org, who lost her mother due to complications from a surgical fire. In fact, her mother also sustained multiple hospital-acquired infections, and apparently died from lack of oxygen as she was connected to a cylinder that emptied—instead of being reconnected to wall oxygen.

One would hope that there are not too many other cases extant that match the tragic medical incompetence that doomed this poor woman.

More stories are hitting the media, including one involving a fire that burned a six-year-old girl in Indiana, who was getting a skin tag removed from under her eyelid. The incident occurred in July, 2004, and a settlement was reached between the girl’s family and the hospital and doctor.

Here is a statement released by the doctor’s law firm:

“My client has performed the same procedure on hundreds of patients without incident. Unfortunately, the elements necessary for a fire—fuel, an ignition source and oxygen—are present in almost every operating room. So, while the incidence of an operating room fire is extremely rare, the risk is present in every surgical procedure involving a cautery device, which is an electrosurgical instrument that uses heat to treat tissues. Because my client was required to use that device during the surgery, there is nothing he could have done to prevent this unfortunate event.”

While the statement lacks even a scintilla of sympathy, it is also astoundingly arrogant and ignorant.

The concentration of oxygen in the ambient air is 20.9%. Technically, at any concentration above this, a state of enrichment occurs, leading to vastly increased flammability of nearly all materials. Ironically, it is very common in industrial settings—but far less common in health care settings—to monitor the air for oxygen enrichment. Typically, the alarm is set at 24%.

It would seem that monitoring the air around the patient, with instructions to turn off all potentially dangerous equipment in the event of an alarm—followed by controlling the leak source—would go a long way in eliminating surgical fires. Of course, it would also help if the know-nothing attitude inherent in such prattle as “…there is nothing he could have done…” were to disappear.

Indeed, a key precept of safety is that there is nearly ALWAYS something that could have been done to prevent an accident, and surgical fires are no exception.