More Than A Fish Story: Bringing Steelhead And Salmon Back To Oregon’s Deschutes Basin

More Than A Fish Story:  Bringing Steelhead And Salmon Back To Oregon’s Deschutes Basin 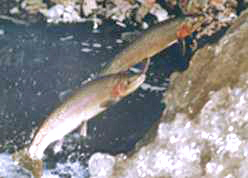 Not every news item about the environment focuses on a battle between Greens and evil polluters. Once in a while, a story emerges that is all about collaboration, involving entities as disparate as a power company, a Native American tribe, non-profits, and a state agency.

Perhaps it is fitting that a unique story like this would involve a unique species—Oncorhynchus mykiss. The freshwater form of this fish is called a rainbow trout, identified by a red band on its side. The same species has another form that is oceangoing (anadromous), known as steelhead. Upon their first marine voyage, steelhead lose their red band, and undergo other color changes, as well.

A couple of weeks ago, the Oregon Department of Fish and Wildlife (ODFW) and the Confederated Tribes of Warm Springs released 200,000 steelhead fry into Whychus Creek, a tributary of the upper Deschutes River. The creek historically had spawning runs of spring chinook salmon and summer steelhead until construction of the Pelton Round Butte dams on the Deschutes River blocked the fish from ascending into the upper river basin.

Dating back to 1964, the Pelton Round Butte project is jointly owned by Portland General Electric (PGE) and the Confederated Tribes of the Warm Springs. As such, it is the only hydroelectric project in the U.S. co-owned by a Native American tribe and a utility.

Although the dams were provided with the latest in fish passage facilities, courtesy of PGE, downstream passage still failed, owning to swirling currents in the reservoir behind Round Butte Dam, christened Lake Billy Chinook. In its own right, Billy Chinook boasts beautiful scenery and a vantage point to view millions of years of geology, along with many species of fish.

In 2001, the initial federal license for Pelton Round Butte expired, and the new operating license issued in 2005 to PGE and the Tribes mandated restoring fish passage.

Crucial to the restoration program are the joint efforts of three non-profit organizations:

Listen to Steve Marx, acting manager of the Deschutes District Watershed, a unit of ODFW:

“Involvement of these local groups is critical to achieving the fish management goal of re-introducing sustainable populations of summer steelhead and chinook in the Deschutes Basin. Success of the reintroduction relies on the cooperative and multi-faceted approach to habitat restoration, protection of the lands adjacent to the streams as well as streamflow restoration…”

Biologists monitoring the success of this effort will have to wait until the spring of 2009, when the downriver-migrating smolts (young fish) on their way to the ocean will be collected at the dam and marked for release into the lower Deschutes.

“The long-term goal is self-sustaining populations that would provide sport, tribal, and commercial fisheries. And looking more broadly at Chinook and steelhead, it’s a very positive thing in restoring them to their historic range. It’s a pretty exciting project to be involved with.”

Indeed it is. Collaboration, rather than confrontation on an environmental issue—What a concept!