Fixing Houses Contaminated With Chinese Drywall: A Report From The Field

Fixing Houses Contaminated With Chinese Drywall: A Report From The Field 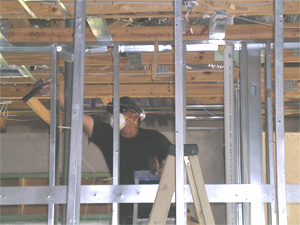 With an estimated 60,000 homes affected, and boasting the warm, humid climate that encourages all the symptoms of tainted gypsum wallboard, Florida is where the action is on the Chinese drywall front. So, that’s where I was last week. I followed a crew headed by construction consultant Michael Foreman, of Foreman and Associates, Inc.

Although Chinese drywall has been identified throughout the state, no area has been harder hit than the city of Cape Coral, with perhaps 5,000 affected homes. I would spend three days there, but the first stop was a house in Venice, FL—suspected of having, and then proven to have tainted drywall.

Foreman has developed a non-destructive inspection protocol to determine if a house contains tainted drywall, that he claims has been correct 100 percent of the time. Gases emanating from the tainted drywall will corrode copper components, and the visible damage shows up on air conditioning and refrigerator coils, as well as copper wiring.

Most affected homes will have some sort of odor, but this can be misleading. For one thing, the human olfactory sense is not linear, and a measured hydrogen sulfide concentration of 30 parts-per-billion does not smell “twice as bad” as a concentration of 15 ppb. For another, at least 18 odorous compounds have been detected in tainted drywall, and even though most of these contain sulfur in some form, one of the main ones—acetic acid—does not.

Indeed, I was armed with an Interscan hydrogen sulfide analyzer and detected the target gas, but noted that the homes I tested did not have the classic “rotten egg” hydrogen sulfide odor. What I smelled was definitely a mixture. As it happens, the closest thing I found to a pure hydrogen sulfide odor derived from sulfide-laden well water, common to many Florida homes. Readings of more than 100 ppb were obtained when sampling air near a running faucet.

Another factor, of course, is ventilation. In the early days of Chinese drywall home testing, ethically-challenged labs were taking air samples with all the windows and doors opened, and the air conditioning running full blast. Since the tainted drywall exudes its corrosive and odorous compounds continuously but slowly, ventilation will go a long way in lowering the ambient concentrations.

As we say, the solution to pollution is dilution.

Once in Cape Coral, Foreman and I met up with a Fox News crew, on site to document how Foreman’s group remediates a house determined to have tainted drywall. At the heart of the remediation is treatment with a proprietary solution containing chlorine dioxide, supplied and applied by AbissoCleanse, Inc.

First comes the demolition phase, followed by the treatment, which is applied to all remaining surfaces. Next, an independent environmental testing company collects core samples of wood and block from the home to be analyzed for any remaining compounds. Based on these results, reconstruction of the home can begin.

Bear in mind that cleaning up the mess is not an effective treatment method in itself, even though some companies are promoting HEPA (High Efficiency Particulate Air) vacuuming as a post-demolition treatment process. It is virtually impossible to remove every last bit of dust, and experience has shown that cross-contamination to the new drywall will occur if this residue is left untreated.

The AbissoCleanse solution also kills all mold and mildew, along with the biological and chemical agents responsible for the corrosive drywall symptoms. The company stands behind its treatment with an insurance-backed guarantee.

During my trip to Florida, I was able to observe homes in all stages of the inspection to remediation process.

I was with Foreman when he had to give the bad news of a Chinese drywall finding to a Cape Coral homeowner. Sadly, the homeowner had previously been given a negative finding by a less experienced inspector just a few weeks earlier. This particular house was still in the early stages of contamination, although telltale signs in the air conditioning, along with some corroded fixtures were present.

Another Cape Coral house had already been remediated by Foreman, with reconstruction well underway. The family looks forward to moving back some time in June. I already mentioned the house in the very process of demolition and treatment, caught on tape by Fox News.

Foreman and I walked through a high-end home on Gasparilla Island, that had previously been suspected of having Chinese drywall. While a treatment process had not yet been decided on, demolition was underway during our visit, and plenty of “Made in China” boards were discovered. Foreman told me later that the owner had chosen him to do the post-demolition treatment.

A recurring theme in my discussions was that right now, the homeowner is on the hook for all costs, and this has obviously limited implementation. Presently, there is no insurance reimbursement, and no outside aid of any kind. Foreman and others in the industry are exploring means whereby some sort of financing will be available to the affected homeowners.

Needless to say, thousands of people are waiting for an answer.