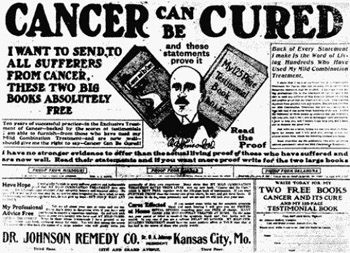 Any discussion of alternative cancer therapy is fraught with difficulty. Conventional therapies can be painful, disfiguring, and have many side effects. And, of course, they are not always successful. Moreover, the cancer “industry” is worth billions of dollars, and those reaping the greatest portion of the benefits would tend to protect their turf.

Accurate evaluation of therapies intended to treat serious and terminal illnesses is virtually impossible, since it would be unethical and inhuman to establish truly valid controls. How many people would be willing to forgo ANY treatment, to act as a control to evaluate a particular therapy? Thus, at best, treatments can only be compared to each other, and even then, numerous confounding factors will apply—not the least of which is the possibility of so-called spontaneous remission.

Finally, there are lifestyle factors to consider. We know that most lung cancer is caused by smoking, and some cancers can be caused by environmental exposures, although this has been overplayed. Many people have changed their diets, and have adopted exercise regimes. To some extent, a cleaner way of living could be cancer preventive. Could expansion of this theory also provide a cure?

In essence, that defines Gerson Therapy. Max Gerson was born in Germany in 1881, and practiced medicine in Germany, Austria, and France. Fleeing the Nazi regime in 1936, Gerson obtained his medical license in New York in 1938. Sadly, the rest of his family perished in the concentration camps.

Gerson’s interest in dietary therapies to cure disease stemmed from his successful self-treatment for migraine headaches. This led to dietary approaches to skin tuberculosis, asthma, pulmonary tuberculosis, and eventually cancer. Initially the diet was high potassium, low (to no) sodium, no fat, certain organically-grown and raw fruits and vegetables, vitamin and mineral supplements, and ingestion of liver extracts. Juicing is key, and only a certain type of juicer is allowed to be used, owing to his belief that alternative methods will destroy beneficial oxidative enzymes.

Besides a carefully controlled diet, Gerson’s therapy is focused on detoxifying the body, with the fundamental goal of allowing the body to heal itself. Coffee enemas—every three or four hours at the initial stages—drive the detox process.

Gerson’s protocol has been modified over the years, and can include ozone, hydrogen peroxide, castor oil, and laetrile. Notably, the raw liver extracts were removed following outbreaks of Campylobacter infection in the 1980s. Inasmuch as a large number of coffee enemas per day has been associated with at least three documented deaths (although not at a Gerson-related clinic), the frequency of these may have been lowered. As it is, there is no scientific evidence that coffee enemas can detoxify, although the practice has many adherents besides Gerson.

The notion of letting the body heal itself certainly has much merit, in that all healing occurs in this manner. Nonetheless, all forms of therapy—including Gerson’s—rely on some form of interaction to jump-start the process.

Gerson published several reports documenting the success of his methods, and these were evaluated by the National Cancer Institute in 1947 and 1959. NCI’s review of the 1947 submission “found no convincing evidence of effectiveness, particularly since the patients were also receiving other anti-cancer treatments.” NCI says that Gerson was invited to submit additional data but never did.

In 1959, NCI examined the fifty case histories presented in Gerson’s book, and concluded that in the majority of cases, the basic criteria for evaluating clinical benefit were not met. Naturally, the Gerson Institute disputed these findings, but no further third party analysis of the cases was ever published. Gerson died in 1959, and his daughter Charlotte established the Gerson Institute in 1977 to carry on his work.

Other evaluations of Gerson’s method have been done in Austria and Britain with less than promising results overall.

NCI has guidelines in place to evaluate the results of human studies. Important here is the concept of “levels of evidence.” This refers to a ranking system used to describe the strength of the results measured in a clinical trial or research study.

To qualify for a level of evidence analysis, a study must:

What are we to conclude?

Given the current environment in scientific journals whereby authors are being solicited to submit articles, and the ongoing interest in alternative cancer therapies, one would think that the Gerson Institute could arrange for a peer-reviewed article. Perhaps they are fearful of unfair treatment by their peers, but even possible rejection could turn into a welcome media event. Is it better for them to permanently claim victim status, as they surely do in the movie The Beautiful Truth (2008)?

Just because regulatory institutions and purveyors of conventional medicine are flawed should not automatically award credibility to followers of Gerson.