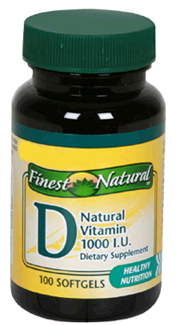 For many years, we were taught that Vitamin D was necessary for strong bones and teeth, and that—as important as it is—was the extent of its benefits. A lot of us remember pictures in high school biology textbooks of those poor souls who had a condition called rickets—the softening and weakening of bones in children, usually because of an extreme and prolonged vitamin D deficiency. An adult version of this condition is called osteomalacia.

Vitamin D is really a group of fat-soluble secosteroids, that act as prohormones (substances that are precursors to hormones). As far as the strong bones or anti-rickets aspect, these prohomones regulate the calcium and phosphorus levels in the blood in two ways: promoting absorption of these minerals from food in the intestines, and promoting re-absorption of calcium in the kidneys.

However, much more is emerging on this amazing vitamin. According to University of Wisconsin researcher Hector DeLuca, “There are a lot of benefits to Vitamin D that have surfaced in the last 20 years.” Indeed, recent studies have shown promise in such diverse areas as cancer prevention, tuberculosis, multiple sclerosis, rheumatoid arthritis, and juvenile (Type 1) diabetes.

An article appearing in the September 10, 2007 issue of Archives Of Internal Medicine, entitled “Vitamin D Supplementation and Total Mortality” described the results of a meta-analysis of 18 independent randomized controlled vitamin D trials, involving over 57,000 participants. A total of 4,777 deaths from any cause occurred during the period studied, and the adjusted mean daily dosage of vitamin D was 528 IU. The study concluded that the group taking the supplement had a 7% reduction in total mortality rates.

This interesting result prompted an editorial comment by Dr. Edward Giovanucci, of the Harvard School of Public Health:

“Given the high probability of benefit for at least some of the many conditions that have been associated with vitamin D deficiency, and the low likelihood of harm, it seems prudent that physicians measure serum 25-hydroxyvitamin D in their patients.”

And now comes word from the University of Michigan Medical School that vitamin D can keep your heart healthy as well. Pharmacologist Robert U. Simpson, Ph.D. and his team published their work in the Journal of Cardiovascular Pharmacology (July, 2008 print issue, appeared May 15 in the e-pub version). Simpson calls vitamin D “the heart tranquilizer.”

Simpson started with lab rats genetically predisposed to develop human-like heart failure, and made sure it would occur by feeding them a high-salt diet. The experimental cohort received vitamin D supplementation (1,25 dihydroxyvitamin D3, a form called calcitriol). 13 weeks later, the D-treated group had significantly lower levels of several key indicators of heart failure than the untreated group.

The experimental cohort had lower heart weight, along with smaller left ventricles. As such, the treated rats’ hearts were smaller, and worked less while maintaining adequate blood pressure. Thus, heart failure (including an enlarged heart)—analogous to the condition in humans, that can progress to congestive heart failure—was prevented. In an additional control group—D-treated rats fed a normal diet—decreased heart weight also appeared.

Simpson had shown a link between vitamin D and heart health back in 1987, but the notion was considered quite radical at the time. Presently, though, there are a number of studies demonstrating this connection, including one out of the UK, where the authors concluded that:

“Vitamin D deficiency and consequent hypocalcemia are seen in association with severe and life-threatening infant heart failure. That no infant or mother was receiving the recommended vitamin supplementation highlights the need for adequate provision of vitamin D to ethnic minority populations.”

With vitamin D supplements inexpensive and readily available, it is simple enough to partake of this newfound elixir of good health.