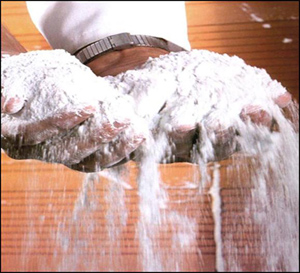 If you’re looking for an environmental “Man bites dog” story, consider the case of gypsum: A product mined from the ground that is nonetheless renewable, and it is renewable by its very usage in pollution control. What’s more, as it renews and recycles, it gets BETTER, unlike many other recycled products.

But, let’s start at the beginning…

The “Paris” designation dates back to ancient times when gypsum—based on large local deposits of the mineral—was used in the city to make plaster and cement. Even earlier, the Egyptians used plaster to join together the massive stones that comprise the pyramids. By the late Middle Ages, the fire-retardant properties of plaster were well known, and King Louis XIV of France proclaimed that the timber frames of his houses had to be covered with nailed boards and plaster, “both inside and out, in such a way that they are able to withstand fire.”

For a good long time, plaster—via the method of lath and plaster—was the primary method for building wall surfaces. While much skill and effort went into plaster walls, repairs could be expensive and cumbersome, so most houses outfitted in this manner had cracks (or worse) somewhere on the walls.

In 1894, American inventor Augustine Sackett obtained a patent for “wallboard.” The material is also known as drywall and gypsum board. In its original format, the wallboard was a 36 inch (914 mm) square sandwich board, consisting of a lightweight, non-combustible gypsum core between six sheets of felt paper.

Gypsum guru Harry Lubitz, of Lafarge North America, explains that wallboard caught on fairly quickly in the US, but its use was generally limited to second tier occupancies, such as lake cottages and vacation homes. It would take the postwar housing boom of the late 1940s to jump-start the transition from plaster to wallboard. The gradual disappearance of the plaster artisans, as well as the time-consuming nature of their process sped up the change.

It is noted that the three basic sources of gypsum are

Coal-fired power plants? That’s right, and it’s the best part of the story. Synthetic gypsum is produced from a process known as Flue Gas Desulfurization.

In order to release less sulfur dioxide (SO2) into the air, coal-fired power plants have installed devices called “scrubbers” to remove most of the emissions. The most widely used process involves lime or limestone slurry and acid-base reactions with SO2. While the chemistry herein is complex, it can be summarized as follows:

This synthetic gypsum is received at the plant in powder form ready for processing. Mined gypsum first needs to be crushed. Furthermore, according to Lubitz, the synthetic version will create a lighter and stronger wallboard.

Other applications of gypsum include

As to drywall, its overwhelming success in the construction industry makes it a commodity these days. But, Lubitz tells us that there are specialty versions…

“We offer a mold-resistant board, and various iterations of abuse-resistant and impact-resistant product. There is also veneer plaster, whereby a plaster coat is applied directly to installed board, with no sanding required.”

“Future developments will take advantage of components that can be added to the wallboard surface, such as carbon fibers for strength, and metal screens for radio frequency interference protection.”

Not bad for an abundant mineral that dates back to prehistory!