Harvest Good Health In The Fall 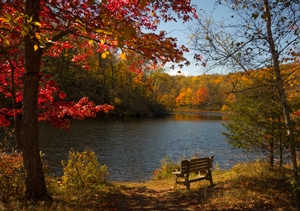 Harvest Good Health In The Fall

For a moment, let’s look beyond the bitter presidential election campaign. Consider, instead, something a bit more basic…more eternal, if you will. We are deep into the season the British used to call “Harvest,” before they re-named it “autumn,” around 500 years ago. In those days, surely, it was a time for reflection. Would there be enough food to cover the winter? Do we have ample firewood? Are our structures and our animals secure?

It would be somewhat later when famed American poet James Whitcomb Riley (1849-1916) gave us a work that pretentious film critics might call a “meditation on autumn.” Written in 1883, in his native Hoosier dialect, “When the Frost is on the Punkin” celebrates the sights, sounds, and emotions of the season. The angels themselves should experience it…

I don’t know how to tell it–but ef sich a thing could be
As the Angels wantin’ boardin’, and they’d call around on me–
I’d want to ‘commodate ’em–all the whole-indurin’ flock–
When the frost is on the punkin and the fodder’s in the shock!

Autumn, or “fall” as we Americans often call it, is the time for the most literal embodiment of “Reaping what you sow.” And if January is when many of us resolve to do better, now is a wonderful time to think about what we’ve done this year to improve our own health and wellness. Indeed, what better time to do this than before the inevitable pressures of the upcoming holiday season–and overindulgence?

As such, this would be true health care, as opposed to disease care, which has been its impostor for far too long. Fortunately, the Internet provides any number of excellent sources for health information, including Health News Digest.

Regarding the matter of healthy living during the holiday season, let’s turn to Bob Caputo, known for his public television series Cookin’ Lite Cookin’ Easy. In this show, he gives practical and easy tips on healthy tailgating. Here’s one on how to eat healthy when dining out.

As he told me recently:

“Healthy living should be educational–and entertaining–living, too. The best way to achieve that goal, which is one of the many reasons behind the videos I shoot, the posts I write and the interviews I do, is to show people that they have options–a multitude of choices for eating better and exercising more. Living well is both a mission and a motto: It reflects what individuals should pursue, as much as it represents what I seek to achieve. Together, we can create a more healthy America.”

A few years ago, US News offered “10 Tips for a Healthy Fall.” They are all apt, and include…

“If we could give every individual the right amount of nourishment and exercise, not too little and not too much, we would have found the safest way to health.”

“A wise man should consider that health is the greatest of human blessings, and learn how by his own thought to derive benefit from his illnesses.”